9 Biggest Traitor Coaches In The History Of College Football 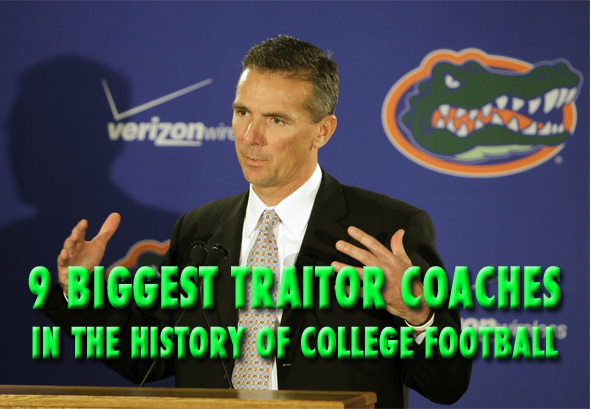 When it was officially announced earlier this week that Urban Meyer, former football coach at the University of Florida, would be taking the head coaching job at Ohio State, I’m sure more than a few Florida fans spit on the ground and began cursing his name as a traitor. But that’s fine by me, because the mere fact that someone can be considered a “traitor” just for changing schools is what makes college football so much fun.

For college fans, loyalty and tradition is everything. Unlike the NFL, you don’t just start rooting for this school or that school because you like a certain quarterback. Being a college football fan requires a certain amount of character, and when fans get the sense that a coach lacks the same, they go crazy. Which is awesome.

Today, we bring you a list of college football’s all-time biggest coaching traitors. I’m sure many of you will think I’ve left some slimy scumbag or another off this list, so by all means let me here about it. Like I said, this kind of thing is what makes college football so much fun. 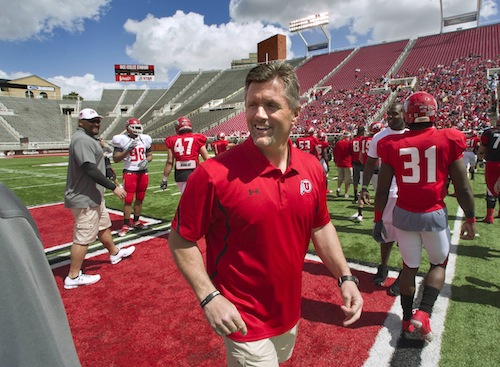 Utah coach Kyle Whittingham has definitely been loyal to the school that gave him is big break as a coach, having spent the last 17 years with Utah. However, when he was offered the head coaching job at Utah in 2005 after serving as defensive coordinator at Utah for 10 years, he was also offered the head coaching job at BYU. What’s the problem? Whittingham was born and raised in Provo, his dad played for BYU, his brothers played for BYU, he played for BYU, and he also coached for a spell at BYU. So you can understand why BYU people kind of expected one of their own to “come home.” But he chose Utah…that bastard? 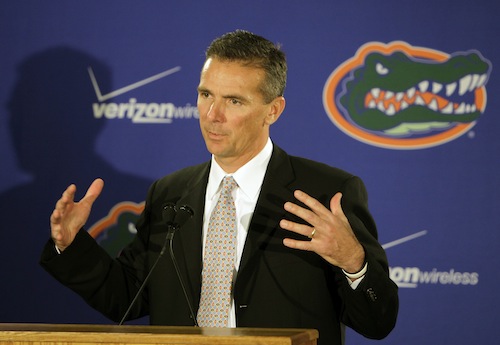 Urban Meyer was the coach at Utah right before #9 Kyle Whittingham took over. But he actually handled that departure well. In Florida, things didn’t end so well. Officially, he “retired” from football after the 2010 season due to health concerns, but anyone who watched the Gators that season saw that he really lost interest in running a top-notch college football program. So despite his tremendous success, Meyer left a bad taste in the mouths of Gators fans. And of course, now he’s announced that he is coming out of retirement to coach at Ohio State. 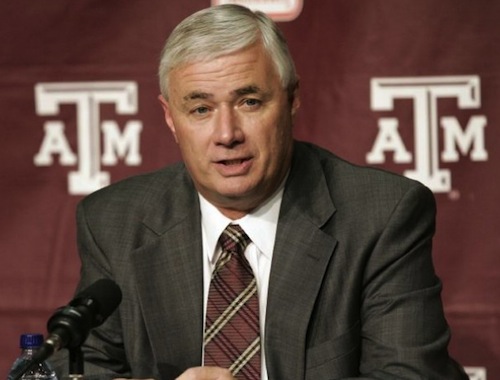 Coach Fran came into Alabama from TCU in 2001 and started to turn around a formerly proud program that was reeling from NCAA recruiting violations. In addition to leading his team to a surprise 10-3 season in 2002, he convinced a number of recruits to stick with Alabama through thick and thin. But when it became clear that the NCAA was going to hand Alabama a two-year bowl ban, Franchione said, “nah, forget it,” and used his success at Alabama to head off to a more lucrative position at Texas A&M.

The worst part is that Fran didn’t even have the balls to tell his players in person. Instead, the douche told them via video teleconference from College Station, Texas. 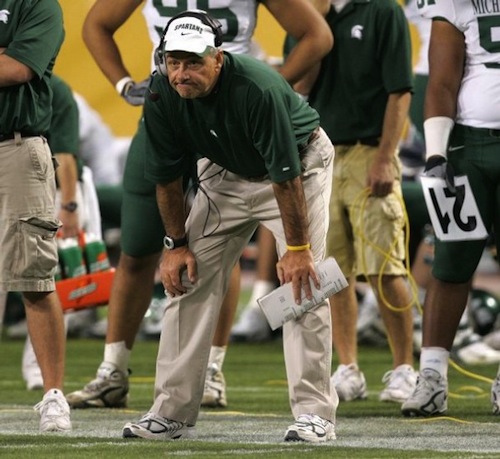 It’s not uncommon for successful college coaches to sign on with a new program before they’ve played their last game with their current program. You just need to have a little tact.

While he was coaching Louisville in 2002, John L. Smith made the decision to move to the more prominent Michigan State. Unfortunately, when it came to telling his players, Smith really screwed the pooch. He thought he would wait until after Louisville’s bowl game; however, news got out during the game and some injured players were notified by friends via cell phone. So Smith had to break the news to the guys in the locker room at halftime.

Needless to say, Louisville ended up losing that game, and Smith left town on a pretty sour note. 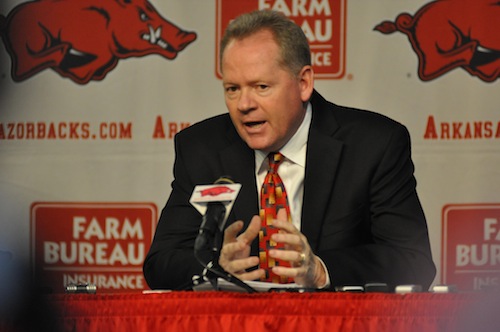 Hey look, another former Louisville coach makes the list. In fact, Petrino was John Smith’s replacement. So if Louisville didn’t have bad luck, they’d have no luck at all.

Petrino came in as head coach at Louisville in 2003 and did a great job. So great, in fact, that in July of 2006 he negotiated a 10-year $25.6 million contract extension that would pay him $1.6 million per year. Obviously, Louisville thought they finally had a top-notch coach locked up for a while that would enable them to really grow their program.

Then, just 6 months later, Petrino announced that he would be leaving Louisville to coach the Atlanta Falcons. (Keep in mind, unlike the NFL, when you leave a college coaching position mid-contract, you really mess up a program’s ability to recruit.)

Adding insult to injury, Petrino didn’t even last a full year with the Falcons. He quit in the middle of the 2007 season to take the head coaching job with…the Arkansas Razorbacks? Seriously? 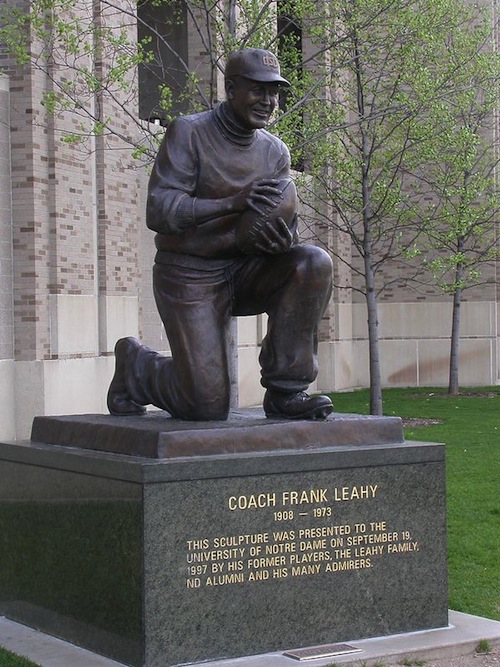 Frank Leahy is a Notre Dame legend. He played for the Fighting Irish under legendary coach Knute Rockne. Then he coached the Irish for 11 seasons, winning 4 national championships.

But what people often forget about Leahy was that, to take the job at Notre Dame, he had to completely screw over Boston College. You see, he led the Golden Eagles to an undefeated season and a victory in the Sugar Bowl in 1940. So BC signed him to a lucrative contract extension after the season. Then Leahy decided that he’d rather coach at his alma mater, Notre Dame. So even though he had no way of getting out of his Boston College contract, he too the job at South Bend.

That was a sticky situation. He begged and pleaded with Boston College to let him out of his contract, but they wouldn’t do it…that is, until Leahy went to a press conference and told a boldfaced lie to the national sporting press about how BC had granted him his release. Upon hearing that, the vice president of Boston College immediately called Leahy and said, simply, “Coach Leahy, you may go wherever you want, and whenever you want. Good-bye.” 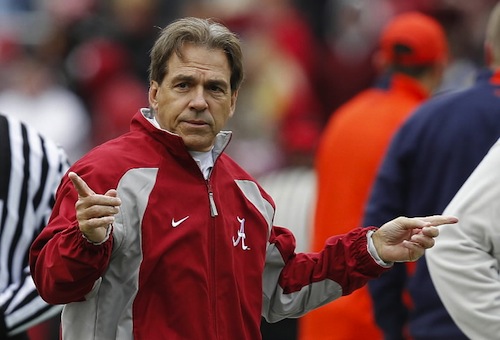 You can’t begrudge a guy who’s conquered the college football world for wanting to try his hand at the NFL. And that’s what Saban did in 2004 when he signed on with the Miami Dolphins after winning a BCS Championship at LSU.

However, if you decide after two years in the NFL that you want to go back to the NCAA, do not go to one of your previous team’s most heated rivals (i.e. fellow SEC member Alabama). That’s really going to piss people off. 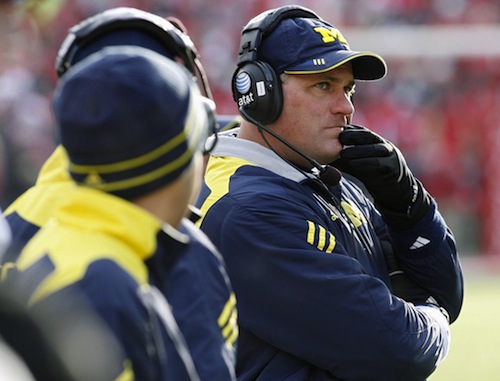 In 2007, West Virginia coach (and West Virginia native) Rich Rodriguez renegotiated his contract with the Mountaineers. But right before his team was to play in the 2008 Fiesta Bowl, Richie changed his mind and decided he’d rather coach at Michigan.

This change of heart might have been forgivable had Rodriguez handled it with class. But he doesn’t have any of that. So what he did was just quit on his team two weeks before their final and biggest game of the season.

At least Rodriguez made Mountaineers fans happy when he crashed and burned at Michigan, then was unemployed for two years (before getting his current gig as coach at Arizona). 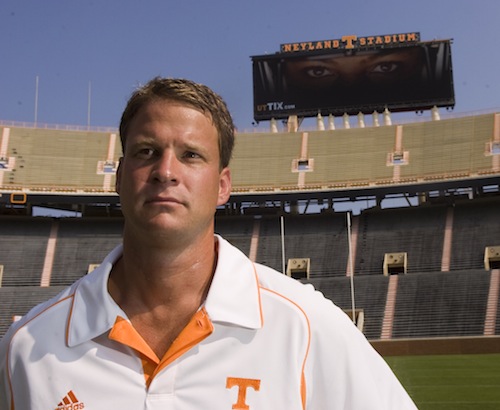 Lane Kiffin is a first-rate jackass. Remember the time he publicly accused Urban Meyer of recruiting violations, even though the accusations were untrue, and Kiffin himself was guilty of numerous violations? Yeah, that was hilarious. But it wasn’t as hilarious as his departure from Tennessee after only one mediocre season.

You see, for some reason, Kiffin had become the hottest young coach in football. The late Al David hired him to coach the Raiders in 2007 at the age of 31. Then, after sucking in Oakland for two seasons, the Tennessee Volunteers thought they saw something in Kiffin and gave him a huge, lucrative contract that he most definitely did not deserve. Then, after just one season, Kiffin left the Vols for USC—yet another team that saw something special in a guy who didn’t really win all that much.

Tennessee players and students were so shocked by Kiffin’s announcement that a riot actually broke out on campus. (Or maybe it was a celebration.)