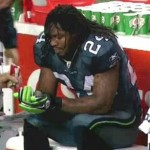 When a dog does something good, the typical response is to give him a treat.  As it turns out, humans aren’t all that different.  When we perform well at work, we are treated to a raise or bonus.  When our children do well at school, they often receive a sticker on their paper.  And when out athletes barrel over several defenders and score a highlight reel touchdown, they are treated to Skittles.

Following his “beast mode” 15-yard touchdown run against the Philadelphia Eagles last night, Seattle Seahawks running back Marshawn Lynch was awarded with a hand full of Skittles upon his return to the sidelines.  According to the broadcasters at the NFL Network, Lynch’s mom had always given him a pack of Skittles to eat after touchdowns.  With that being said, it appears as though the bruising running back has been eating plenty of Skittles over the past couple of months, as he has now recorded a touchdown in each of his last eight games.

I guess there is nothing quite like “tasting the rainbow” after reaching the end zone.

Here is a look at Lynch’s 15-yard beast-mode touchdown run and his ensuing Skittles feast.