It Sure Does Suck To Be A Vikings Fan (Video) 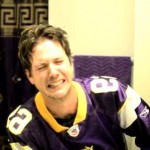 In 2009 the Minnesota Vikings appeared to be one of the top teams in the NFL, as Brett Favre had just finished leading them to their second consecutive NFC North title and a birth in the NFC Conference Championship Game, where they would lose in overtime to the eventual Super Bowl champion New Orleans Saints.

Fast-forward two years to the current NFL season, which has been anything but pretty for the Vikings and their fans.  In addition to sitting in last place in the NFC North, they have also watched the Donovan McNabb experiment fail miserably, they blew sizable second half leads in each of their first three games, and their star running back, Adrian Peterson, has been hampered by a knee injury.

Yes, it is certainly a tough time to be a Vikings fan, but don’t take my word for it.  Instead, take it from the Vikings fan in the video below, who I’d imagine represents the feelings of everyone in Minnesota that supports the purple and gold.