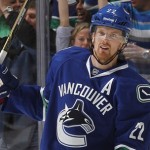 After suffering through some early struggles this season, the Vancouver Canucks seem to have finally found their form.  They entered last night’s game against the Colorado Avalanche with wins in six of their last seven games, and they would continue to roll thanks to the hot stick of their team’s leading scorer.

Daniel Sedin entered last night with a goal in each of his last three games.  He would add another three goals to his total, as he scored one in the first period and tacked on another two in the third to complete his fifth career hat-trick.  His three goals would account for half of the Canucks scoring, as they cruised to the easy 6-0 victory.  In addition to the win, Sedin also earns our “Stat Line of the Night” for Tuesday, December 6, 2011.