Today, Total Pro Sports takes a look at the 11 most amazing places to watch college basketball. These are college sports venues that possess the perfect combination of history, atmosphere, aesthetics and, of course, quality basketball.

Still, since it’s the so-called “intangibles” that make college sports so much fun to begin with, there’s no point trying to get too scientific. So while I tried to use the above criteria as a guideline, ultimately I had to go with my gut instinct as a fan.

Anyway, enough with the introduction. Let’s get down to business, shall we? 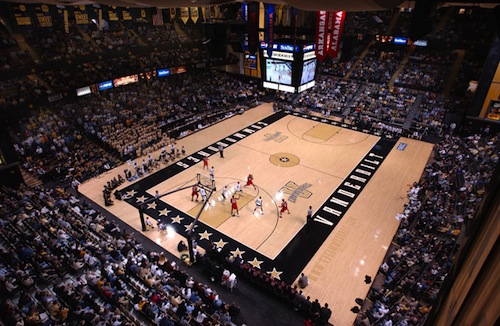 They call this place (built in 1952) the Fenway Park of college basketball, which is a pretty damn good nickname. The reason they call it this has to do with its idiosyncrasies—like the fact that it was designed to be a theater, and thus has fans seated in balconies; or the fact that there are extra wide out-of-bounds areas along the sidelines, yet the benches are located at the end of the floor. Watching a game here with 14,000 screaming Commodores fans is definitely on my sports to-do list. 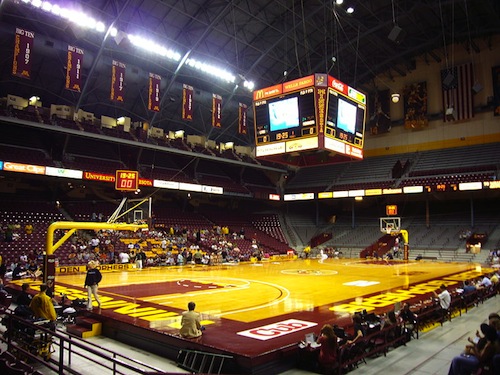 Built in 1928, this is one of the oldest college basketball arenas still in use today. Though its officially named Williams Arena, they call is The Barn because of the low arched ceiling, and because it can be quite a raucous place. All in all, it’s an intimidating place to play in if you’re on the opposing team, but it’s a blast if you’re a fan. 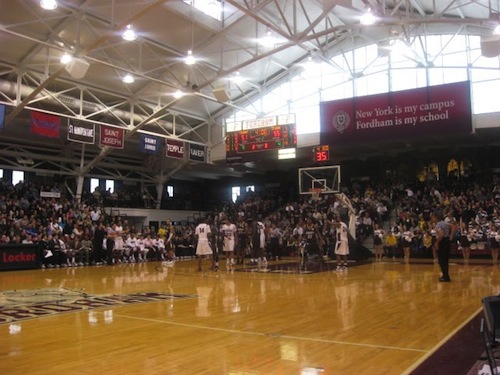 This one is my official off-the-radar pick. Though the Fordham Rams of the Atlantic 10 Conference are hardly a basketball powerhouse, it’s tiny basketball venue is a real gem. The Rose Hill Gymnasium, built in 1925, is the oldest on-campus college sports venue still in use today. What makes it so special, though, is not so much the history but the intimacy. This tiny place holds only 3,200, making more like a high school gym than the site of NCAA Division-I Men’s Basketball. Can you imagine what it’s like in there for a big game? 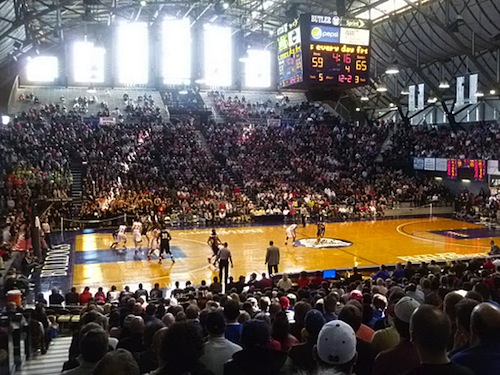 The Butler Bulldogs’ Hinkle Fieldhouse just oozes history. And it should, given that it was built in 1928, is located in basketball-loving Indiana, and was the site of the real-life events that inspired the classic film, Hoosiers. Combine with this history an excellent basketball program and some great fans, and you’ve got yourself one can’t-miss college basketball experience. 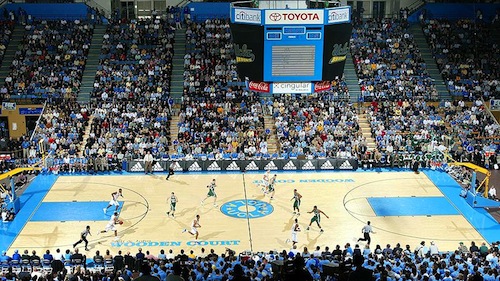 UCLA’s Pauley Pavillion was built in 1965. Then, starting in 1967, the John Wooden-coached Bruins won 8 straight National Championships to go with the two UCLA won in 1964 and 1965. I would say that is a pretty rich tradition; and since Pauly was the epicenter of this historic stretch, that makes it a pretty special place. More importantly, every fan at every game knows it. 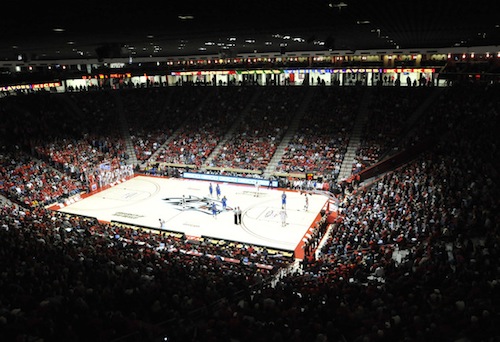 By all accounts, The Pit (which became the arena’s official name in 2009) in New Mexico is one of the most unique college basketball experiences you’ll come across. The arena floor sits below grade, meaning you kind of have to climb down into the place (hence the name), and the lighting is wonky, giving the place an eerie glow. Most importantly, the NM Lobos are always one of the leaders in average attendance, so The Pit is hands-down one of the 5 loudest arenas in the country. 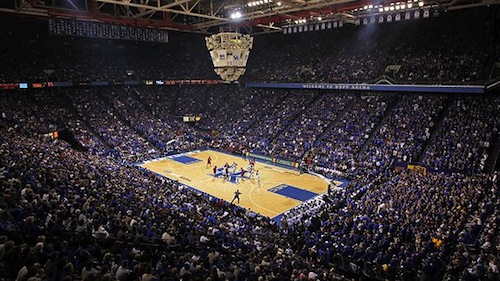 The Kentucky Wildcats have (arguably) the most passionate fans in college basketball. So you would expect their arena to be a special place—and it is. Though Rupp Arena isn’t that old (opened in 1976), it’s got atmosphere out the wazoo thanks to some of the loudest fans in basketball. But perhaps the coolest thing about the place is it’s lack of frills. There are no luxury suites at Rupp, just 23,500 seats that make it the largest basketball-only arena in the country. And Rupp doesn’t have any cute nicknames, either, because it doesn’t need any. 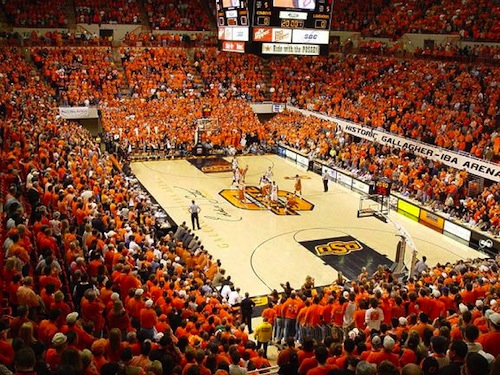 Opened in 1938, the OSU Cowboys’ Gallagher-Iba arena is affectionately known as the Madison Square Garden of the Plaines, and it’s white oak floor is the oldest still in use in college basketball. More to the point, the place is just an absolute madhouse. North Carolina Tar Heels coach Roy Williams told ESPN that, of all the places he’s ever coaches in, this place was the toughest. Of course, maybe that was just a dig at Tobacco Road rivals Duke. Still, that’s high praise for Gallagher-Iba. 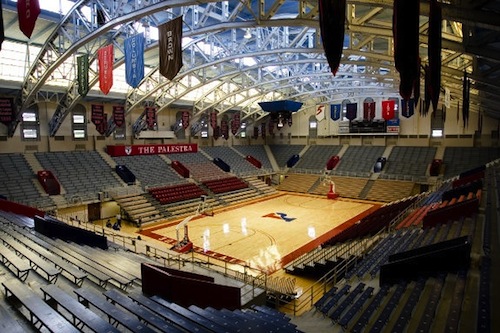 The Palestra, a.k.a. the Cathedral of College Basketball has it all.

It was built in 1927 and is an architectural masterpiece both in terms of aesthetics and engineering. It is intimate, seating only 8,000, but binging the bleachers right down to the floor. And it hosts some incredible basketball with intense rivalries: the Philadelphia Big 5 teams (Penn, LaSalle, Saint Joseph’s, Villanova, and Temple) play each other there every year to determine bragging rights in the City of Brotherly Love. I imagine the Big 5 championship game at the Palestra is a pretty awesome thing. 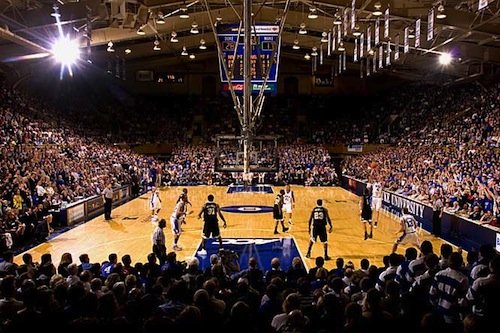 The Duke Blue Devils may be the Yankees of college basketball (with the Tar Heels being the Red Sox), and thus rather insufferable at times, but you can’t deny that their home arena provides the ultimate college basketball experience. It’s old (opened 1940), it’s intimate (9,314 fans), it’s insanely loud, and the home teams wins most (83%) of the time. 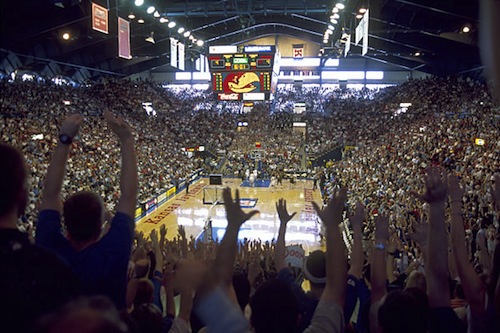 Since KU’s Allen Field House was named after legendary Jayhawks coach Phog Allen, it’s only natural that it would nicknamed The Phog. Of course, even if it wasn’t named for a guy called Phog it might still have that nickname, since opponents often feel like their playing in fog. The Allen is one of the loudest arenas in college basketball, and the fans are second-to-none when it comes to intensity and tradition.

Before every game, everyone sings the schools alma mater, “Crimson and the Blue,” with their arms around each others’ shoulders, swaying back and forth. Then, after the national anthem, when the opposing team is being introduced, everyone in the student section pulls out the campus newspaper and pretends to read it, feigning complete indifference to their opponent. Oh, and that “Rock Chalk, Jay Hawk” chant? It dates back to 1889.

So take a road trip to Lawrence, Kansas, some time if you want a truly memorable college basketball experience.