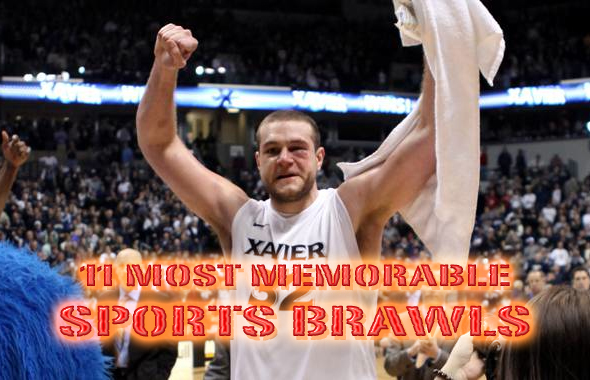 Sports fans were treated to what will surely become an all-time classic brawl this past Saturday when the Cincinnati Bearcats and the Xavier Musketeers faced off in the annual Cincinnati Crosstown Shootout. Now, I know we’re not supposed to condone this sort of behavior. We’re supposed to talk about how it’s an embarrassment and how consequences must be paid. And ultimately I agree. We can’t have this sort of thing happening all the time. But you have to admit, every once in a while a big sports brawl can be pretty entertaining.

Today I thought we’d take a look at 11 of the most memorable sports brawls ever. They may not be the nastiest or most violent altercations, but each one has something that makes it stick out in your memory.

This “brawl” didn’t actually involve any punches. It was really just a lot of yelling and some mild shoving. But the incident is notable because it’s freaking NASCAR. Guys aren’t exactly competing in close physical proximity to each other. So to get into any kind of fight with another competitor takes serious determination. You’ve got to hold on to your rage for at least 10 or 15 minutes, get out of your car and walk over to wherever the other guy is—which could be as much as a quarter mile away. It’s impressive.

As far as brawls between entire teams go, this one was kind of lame. That’s why it only comes in at #10 on this list. However, this brawl did provide perhaps the single most hilarious mano-a-mano altercation in the history of pro sports. I am talking of course about Pedro Martinez’s classic matador impression against the old, round, charging Yankees’ bench coach Don Zimmer.

Unfortunately, Major League Baseball is obsessed with making sure all quality footage of these types of incidents are wiped off the internet, so we’re left with poor quality clips like this. But at least it give you the general idea of what happened.

This game was a doozy. Based on the footage here, it may look like a nasty foul by New York’s Mardy Collins started the brawl. But in reality, Denver’s actions got the ball rolling. You see, they had a big lead in the 4th quarter, but they kept their starters in the game and tried to run up the score, throwing in a bunch of fancy dunks for good measure. Obviously the Knicks took exception to this lack of respect, so they took action. What transpired was one of the NBA’s worst brawls.

Reds second baseman Brandon Phillips called the St. Louis Cardinals a bunch of nasty names in an interview with a newspaper reporter prior to a series against the Redbirds. So when he stepped up to the plate in game one and tapped catcher Yadier Molina as a friendly gesture, Molina was going to have none of that. They argued, and soon the benches cleared.

The giant scrum made it’s way to the backstop, where Reds pitcher Johnny Cueto got in a pinch and tried to kick his way out. He managed to stomp Cardinals pitcher Chris Carpenter on the back with his cleats, and he got Cardinals backup catcher Jason LaRue in the head. The blow gave LaRue a concussion that forced the veteran to retire after the season. There has been bad blood between these two teams ever since.

Hockey is the only major pro sport in North America where fighting is considered a normal part of the game. Even still, full-on brawls (usually called line brawls) are somewhat rare—and often a sight to behold. This particular brawl—known as the Punch-Up in Piestany—is notable for three reasons.

First, as you can see, it’s pretty wild. Second, it takes place during an international game, which are usually more civil than league games. Third, this is from the Junior World Championships—meaning all these guys were under 20 years of age.

The brawl was actually so wild that the officials gave up trying to break it up and just left the ice. They tried shutting off the arena lights, but the brawl lasted 20 minutes before tournament officials declared the game void.

This brawl was just plain bizarre. This summer the Georgetown University men’s basketball team made a good will exhibition trip to China. In a game against the Bayi Rockets, a brawl broke out after the Hoyas finally grew tired of the excessively violent play from their Chinese opponents. No one was seriously injured, but it is definitely the strangest brawl in recent sports history.

Why is this brawl memorable? Because it features aging pitching legend Nolan Ryan putting youngster Robin Ventura in a headlock, giving him a noogie and, of course, a few good punches. The lesson: think twice before you take exception to getting plunked by Nolan Ryan.

You knew this one would make the list. Who could forget it? A minor brawl between the Pacers and Pistons players turned ridiculously ugly when Ron Artest—oops, I mean Metta World Peace—jumped into the stands to attack a fan who threw an adult beverage on him. It was a huge black eye for a league that already had a pretty big image problem.

The Miami Hurricanes and Florida International University Golden Panthers had never faced each other prior to 2006. However, they looked like long-time rivals with chips on their shoulders as they engaged in probably the biggest and nastiest brawl in college football history. This clip does a nice job of highlighting and narrating the best parts, so I won’t bother explaining them. Just watch and enjoy.

SUBSCRIBE to TotalProSports
The Giants and Dodgers rivalry goes back to the days when the two teams were neighbours in New York City. Fortunately for baseball, they took their rivalry out west when the teams moved to San Francisco and Los Angeles respectively.

This 1965 brawl between the two rivals is one of the most violent incidents in MLB history, as it involved players swinging bats at each other. It started with Dodgers catcher Johnny Rosboro accidentally throwing a ball at Giants pitcher Juan Marichal. It ended with Marichal whacking Rosboro in the head with a bat, opening a nasty gash and earning a hefty fine and suspension.

The mid- to late-70s was the most violent era in the NHL’s history, and it was dominated by the Philadelphia Flyers’ “Broadstreet Bullies.” Yet the most infamous incident of the era was perpetrated by the Boston Bruins at Madison Square Garden in 1979.

A regular “Old Time Hockey” brawl was underway between the Bruins and Rangers when a Rangers fan threw a rolled up program at a Boston’s Stan Jonathan. This prompted the Bruins’ Terry O’Reilly to climb up over the glass, into the stands, and start pummelling people. He was soon joined in the stands by Mike Milbury, and the two went to town on a handful of New Yorkers.

It stands to this day as the most bizarre and, therefore, most memorable sports brawl of all time.