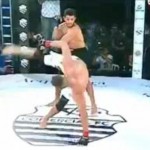 With only a couple of weeks remaining in 2011, it appeared as though Patricky Pitbull, John Makdessi and Arthur Guseinov were all front-runners to earn the award for MMA “Knockout of the Year.”  That no longer appears to be the case following this past weekend’s events, however, as Cairo “Relampago (Lightning)” Rocha provided us all with this incredible spinning heel kick knockout against Fracisco Neves during Brazil’s “Desafio dos Imortais” (Challenge of the Immortals).

With two weeks to go and a couple of MMA events still left on the 2011 schedule, there is no guarantee that this knockout will stand as the year’s best once January 1st rolls around.  And if Rocha’s spinning heel kick is topped before then, the real winners will be us, the fans of MMA.

But for the time being, here is another look at the 2011 “Knockout of the Year.” Enjoy!