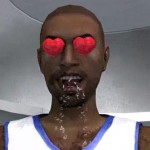 I had absolutely no clue that Monta Ellis was facing a sexual harassment lawsuit for sexting former Golden State Warriors employee Erika Ross Smith, but I know all about it now thanks to the people at NMA World.

As the story goes, Ellis, who is married, spotted Smith working for the Warriors and began sending her sexually suggestive text messages in November 2010.  He even sent her an image of his dong, but when Ellis’ wife found out about her husband’s advances on Smith, she attacked the former Warriors’ employee.

In an attempt to clean up this mess, the organization opted to fire Smith, but that move could end up costing them, as she has since filed a sexual harassment lawsuit against Ellis and the Golden State Warriors.

That’s my explanation.  If you’d like to see NMA World’s much more interesting interpretation of the story, you can check it out in the video below.