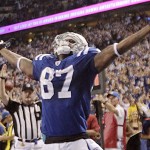 Reggie Wayne entered the 2011 NFL season with the reputation of being one of the more dominant receivers in the league, but he has struggled to live up to that label without Peyton Manning throwing him the ball.  Entering last night’s game against the Houston Texans, Wayne had recorded only three touchdowns and 781 yards through 14 games.  However, he would improve upon those mediocre numbers in a rather significant manner.

Wayne was on the receiving end of eight of Colts’ quarterback Dan Orlovsky’s 23 completions, as he compiled a total of 106 receiving yards and one touchdown during Indy’s 19-16 upset victory over the Texans.  That isn’t necessarily what we would consider to be a monster statline, but it was an impressive performance from a receiver that has had his fair share of struggles this season, and it was enough to help his team earn the victory.  As a result, Wayne earns our “Stat Line of the Night” for Thursday, December 22, 2011.