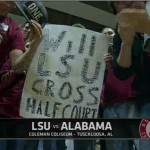 When Alabama and LSU faced off on the gridiron Monday night during the BCS National Championship Game in New Orleans, the Tigers struggled to pass midfield, doing so only once throughout the entire 60 minute game.  As many of you already know by now, the Crimson Tide walked away from that battle with a dominant 21-0 victory.

Last night the two schools hooked up again, this time on the hard-court.  And while at least one of the Alabama fans in attendance was wondering whether or not LSU would be able to pass mid-court, it didn’t take the Tigers’ players nearly as long to reach the offensive zone this time around – 20 seconds, to be exact.  And in doing so, they received a warm round of applause from the Crimson Tide fans.

LSU would go on to lose by a score of 69-53, dropping another contest to their SEC rivals.  But on the bright side, at least they were able to score some points this time around.