The NBA certainly has its share of problems (like commissioner David Stern). But if there’s one thing the league has going for it, it’s that it looks good on TV. And in an age when every single game is televised, looking good on TV really matters.

So today, let’s celebrate one of the things the NBA really does right with a list of the 12 best court designs of 2012. Some are classic designs that never change; others are fresh and modern. In each case, they look damn fine on a 42″ HD TV. 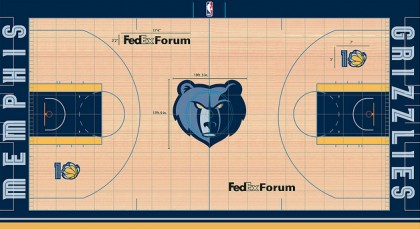 The Memphis Grizzlies' primary logo is a tad boring when confined to a hat or shirt, but it looks pretty sharp when blown up to 19'x17'. It's always good when center court isn't cluttered with words (you hear that, Cleveland Cavaliers?) Also solid in this design is the lettering at either end of the court, and the nice contrast of colors in the paint. (That "10" logo with the zero made of a basketball with a bear claw around it is pretty awesome, too. However, that was only there last season, when the Grizzlies were celebrating 10 years in Memphis. So they can't get credit for that this year.) 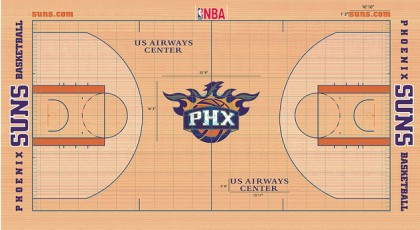 The Phoenix Suns have gone with an understated two-tone finish for the wood and a not-too-contrasty orange striping around the paint...which would be really boring if it didn't make their awesome center court logo stand out that much more. As it is, the whole design works really well. If they had a busier design for the paint area and at the ends of the court, the court would look kind of cluttered and be very distracting to TV viewers. (Most of the league seems to have learned from the errors of the Houston Rockets—inducing the Houston Rockets themselves) 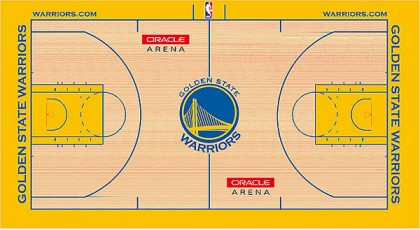 There is almost nothing to like about the poor Golden State Warriors—from the fact that they are named the Golden State Warriors, to the fact that they have made the playoffs 6 times in the last 34 years. However, I must admit that they have finally gotten their uniforms, logo, and court design right after 13 years of awfulness. The simple two-color theme has a nice retro feel that makes you remember that this is actually a pretty old franchise (1946) that used to be respectable (they won it all in 1975). And that center court logo is one of the best in the league. The only thing keeping the Warriors' design from being higher on the list is that red Oracle logo, which really clashes with the overall aesthetic. Other than that, it's top-notch. 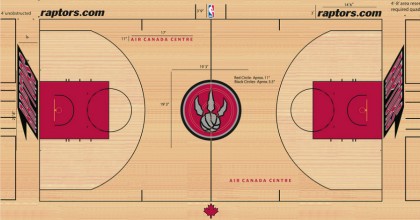 I don't like the changes the Raptors made to their excellent raptor claw logo—which went from white (or red) to grey. So in my opinion, this change negatively affected their center court logo. However, the Raptors made one change to their court this year that gets them on this list, and that is the awesome tromp l'oeil—a fancy French term for "optical illusion"—lettering at the ends of the court. You see, when you watch on TV, it looks like there's a placard that says "Raptors" at each baseline. In reality, it's just a fancy 3D paint job that creates the illusion of placards. Which is awesome. 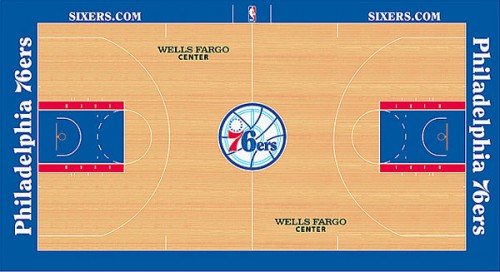 How a team named the Philadelphia 76ers (in honor of the Declaration of Independence, for all you non-history majors out there) ever got away from red, white, and blue uniforms and court designs is beyond me. But I'm glad the Sixers have come to their senses and gone retro. Their current court design is simple and classic. Hopefully they'll think twice before going "modern" again. 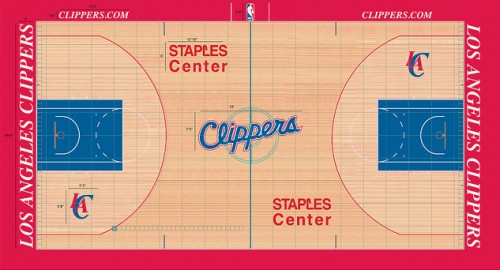 Normally (as we've established) I'm against having words involved in a team's center court logo. But every rule of thumb has its exceptions, and this is one of them. The Clippers' logo at center court, with that classic-looking script font, looks fantastic. Add to that the great team colors and the lighter shade of wood inside the three-point arc, and what you have is a great-looking court design. (And now the Clippers may actually have a decent team to play on it, too.) 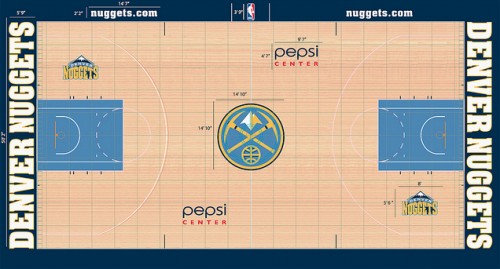 The Nuggets may have gotten rid of Carmelo Anthony and his headbands, but at least they kept their great colors and that excellent center court design. (Though, if it were me, I'd make that center court logo a little bigger than 14'x14'.) 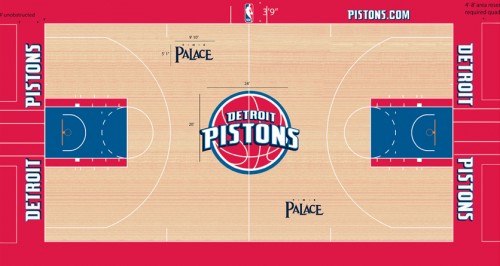 The Detroit Pistons court design would have been a little higher on the list if they hadn't made changes to their paint/free-throw circle design this year. Previously, the paint was blue and the free-throw circle was red, which I really, really liked. Now, the top part of the circle is blank, and the blue paint has red strips surrounding it. However, at least they increased the size of the center court logo to fill the void. (Bigger: always better.) So is it just me, or was it just a little better before? 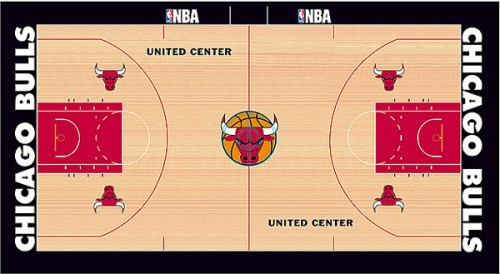 The Bulls logo and court design has changed so very little over the years. That's because the team has the good sense not to mess with perfection. I mean, how can you not like this one? It's classic. (Bonus: the basketball behind the bull's head at center court let's viewers know they're watching a basketball game. Without that, they might be confused.) 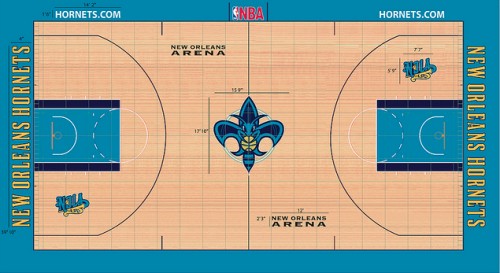 This one is probably my most daring pick, so I understand if not everyone's on board here. But I just love the flour-de-lis hornet logo—I think it's one of the best in any sport. Also fantastic are those "NOLA" logos at either end of the court, with that great old-school 'Nawlins script and the trumpet-like embellishment underneath. So from the colors, to the logo, to the font on the lettering, this is just an all-around great court design. 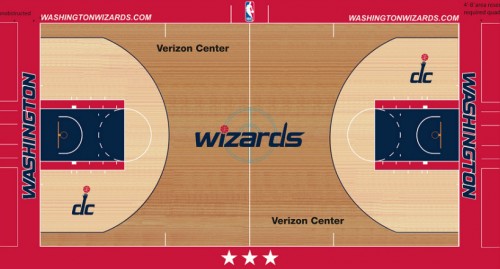 The Washington Wizards didn't exactly go from worst to first between last season and this season (since, you know, I slotted them in at #2). But it was pretty damn close. For 2012, the formerly design-challenged Wizards took some advice from their neighbours at the Verizon Center (the Washington Capitols) and ditched their "modern" colors for their old-school red, white, and blue. Then, most importantly, they switched out their the bizarre (and creepy) wizard logo at center court with a simple word logo—yet another exception to my "no words at center court" rule. Then they changed out the old "DC" secondary logos for new "DC" logos that actually recall the team's history as the Washington Bullets (with the hand reaching for the basketball). Now, the Wizards' court is actually one of the best-looking ones in the league instead of one of the most awful. 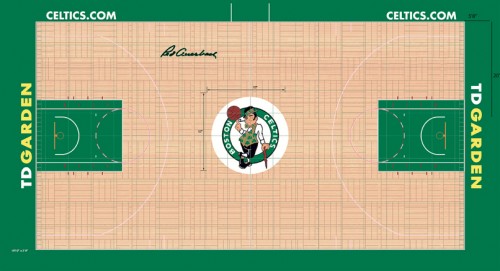 By now you've probably figured out through the process of elimination that the Boston Celtics court is #1 on the list—since I would have to be insane to leave it off altogether, right? Right. So here it is. You've got the classic parquet floor, the classic logo at center court, and the simple green side court and paint. Everything about this design says "we're the most storied franchise in the NBA." They just don't get any better than this.