Line-Brawl Breaks Out During NLL Game (Video)
More Other 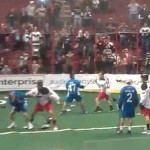 It may take some time for the players on the Philadelphia Wings and the Rochester Knighthawks to get their legs into tip-top shape as they begin the 2012 NLL season, but their fists already appear to be in midseason form.  They put them on display during the final minute of their match-up on Saturday night, as players from both teams dropped the gloves and engaged in a line-brawl with the Knighthawks holding a commanding 22-12 lead.  Even the goalies took a moment to get in on the act, as the fans in the Wells Fargo Center seemed to love every second of it, despite the unfavorable outcome for their home team.

When it was all said and done, a total of 96 penalty minutes were handed out following the melee.  You can check out all of the action in the video below.