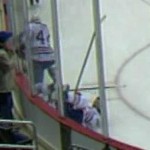 The “kids” that have brought a much needed spark to the Edmonton Oilers’ line-up this season have suddenly been dealt their fair share of bad luck.  Heading into last night’s game against the Columbus Blue Jackets, the Oilers were already without their leading scorer Jordan Eberle (leg injury), and 2011 first-overall draft pick Ryan Nugent-Hopkins (left shoulder injury).  Now they could be without their 2010 first overall draft pick, Taylor Hall, after he was cut in the face by a teammate’s skate during the pre-game warm-up last night.

While skating around in his team’s zone, Hall slipped on a puck and slid into the boards, taking out a couple of his teammates on the way.  One of those teammates was No. 44 Corey Porter, whose skate appears to slice the face of Hall as he attempts to leap over him.  Hall required 30 stitches above his eye and was kept out of the game.  He is questionable for tomorrow’s contest against St. Louis.

While everyone is thankful that things didn’t turn out worse for the Oilers’ 20-year-old superstar, the incident does have some asking whether helmets should be mandatory at all times when players are on the ice, including during pre-game warm-ups.  Hall wasn’t wearing his helmet at the time.  Had he been, this scary episode probably could have been avoided.