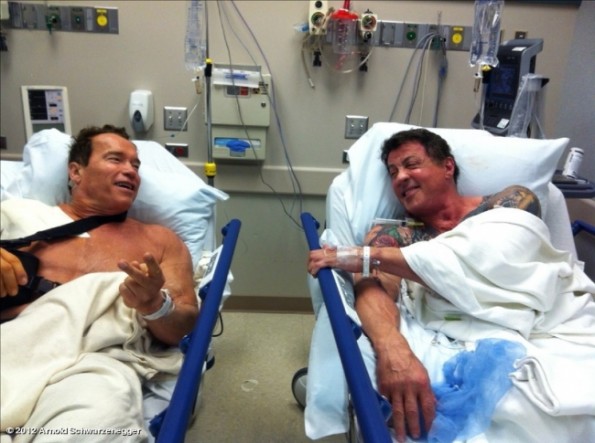 This photo of Arnold Schwarzenegger and Sylvester Stallone was recently taken in the pre-op room as the two jacked-up celebrities prepared for similar shoulder surgeries.  This has us thinking that perhaps “The Expendables 2” is no longer expected to make as much money as either of them had originally expected.  As a result, they had to opt for the 2-for-1 special on shoulder surgeries that the hospital was offering that day (these last two sentences are nothing more than assumptions).

In addition to posting the image, Arnold also included the following caption (to get the full effect, imagine it being read with a strong Austrian accent):

After all the action, stunts & physical abuse shooting The Expendables 2 and The Last Stand, it was time for a little tune up on my shoulder. Look who was coincidentally waiting in line behind me for his shoulder surgery. Now we’re ready for another round of great times and action when we shoot The Tomb.

Hopefully things go much better during the filming for “The Tomb” (both physically and financially), else these two men could find themselves searching for discount hip-replacement surgeries in a year or so.

Hat Tip – [Blame It On The Voices]