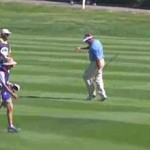 Ken Duke’s form during his second shot from the fairway on the par-4 16th at Pebble Beach yesterday was impressive, and it would result in an eagle.  As for his form during his celebratory dance afterwards, well let’s just say it was far from impressive.

After draining his approach shot, Duke did what every 42-year-old white man would like to do, but what few of them actually know how to do…

Duke shot a course-record 8-under on the back nine after shooting even par on the front nine.  That has him sitting just one stroke behind the leaders following the first round of the AT&T Pebble Beach National Pro-Am.  If he can find a way to stay near the top of the leaderboard, perhaps he should consider using some of the prize money he’ll win to pay Giants wide receiver Victor Cruz for some salsa lessons.