It’s funny how athletes always want to hang out with celebrities, and celebrities always want to hang out with athletes. There’s a weird kind of synergy between the two sets of super wealthy people—each seems to understand the other, and yet each also wants to be like the other. Meanwhile, the rest of us would have thought they’d all just be content to be super wealthy. But what do we know, right?

Anyway, while it’s extremely difficult for a pro athlete to cross over and become a hollywood celebrity, some of them at least look like celebrities. And if the athlete is not particularly well-known—like Roberto Luongo in Alabama—it might be pretty cool to walk into a Waffle House and be mistaken for a famous actor. (Though, to take the example I just gave, I’m not sure you would want to be mistaken for Sacha Baron Cohen in Alabama…not after Borat.)

Here are 20 pairs of athlete-celebrity look-alikes. In some cases, the comparisons are flattering for either the athlete or the celebrity, or both. In other cases…not so much. But what can you do? It’s nature. 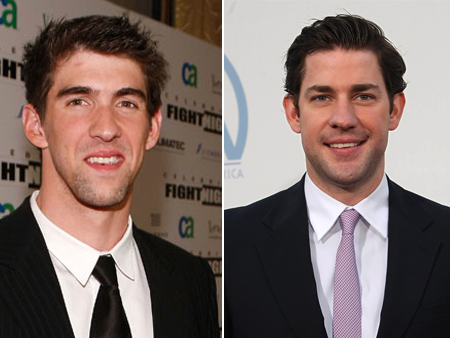 Coming in at #20 is everyone's favorite doobie-smokin 14-time Olympic gold-medalist, Michael Phelps, and our first entry from NBC's The Office, John Krasinski. 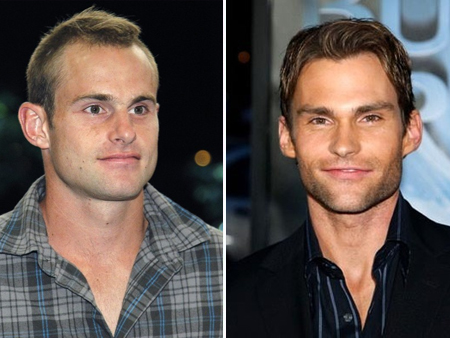 It's not just their face that are similar, but their careers, too. Both are typecast—Seann William Scott as Stiffler, Roddick as the perennial second-place finisher. 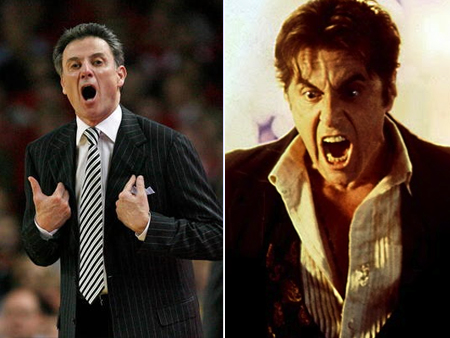 Their faces are look-alikes, and their names are sound-alikes. Awesome. 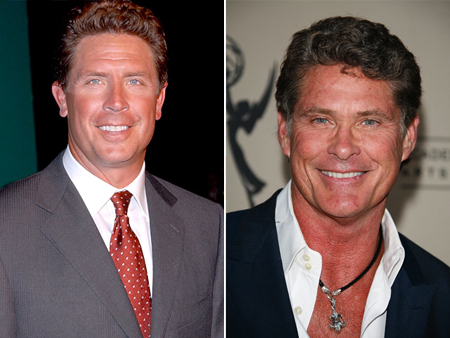 If Dan Marino would only have his smile surgically enhanced and show a little more chest hair, he'd be the spitting image of David Hasselhoff. 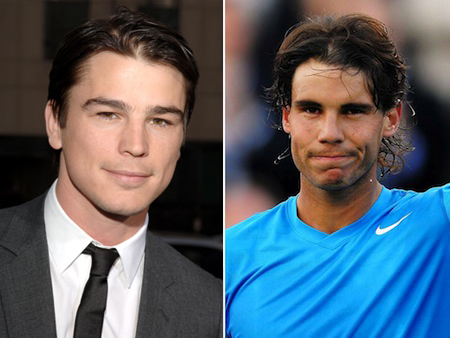 These guys only look alike when they make this weird smile, and when Hartnett squints. But hey, that counts. 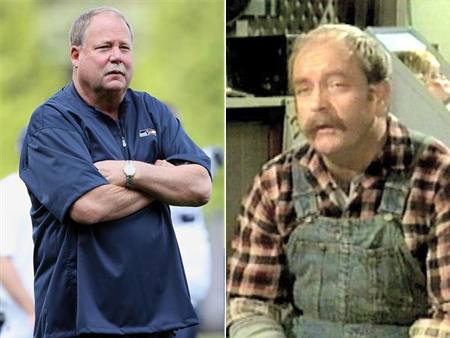 When Wilford Brimley finally gets too old to do those diabetes commercials, former NFL coach Mike Holmgren can cash in. (I don't think the old folks watching at home would even notice the difference.) 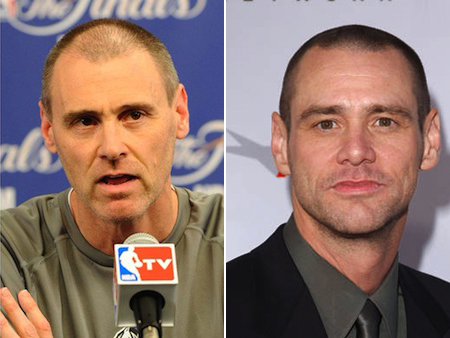 Dallas Mavericks coach Rick Carlisle may have won an NBA championship last year, but I bet his real goal in life is to make people laugh like Jim Carrey. 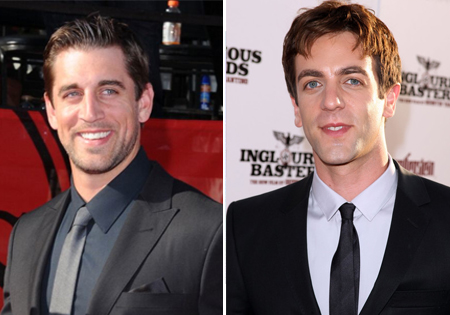 At #13 we have the second appearance from a cast member (and writer and co-executive producer) of The Office. This time it's BJ Novak, who looks an awful lot like NFL MPV Aardon Rodgers.

Cool trivia: Novak and John Krasinski, cast members on the same TV show, are from the same class at the same high school in Newton, Massachusetts. 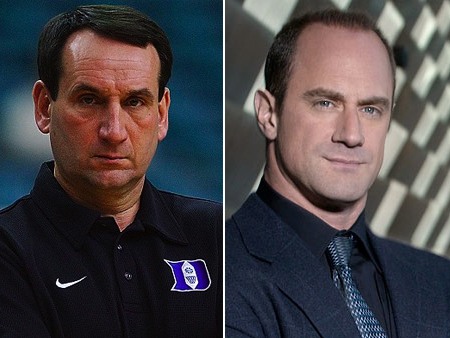 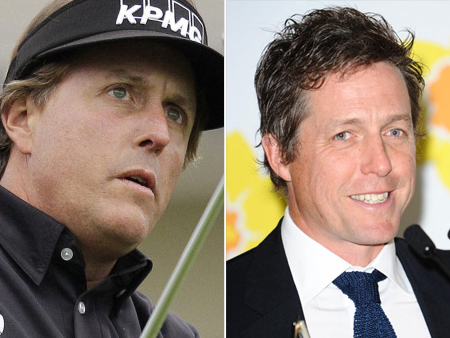 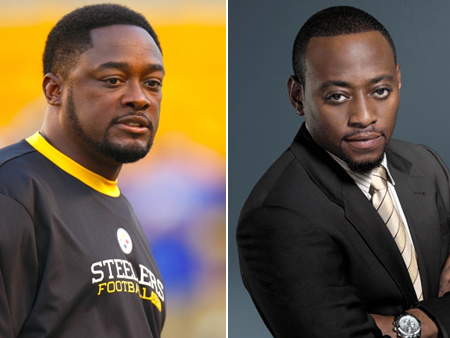 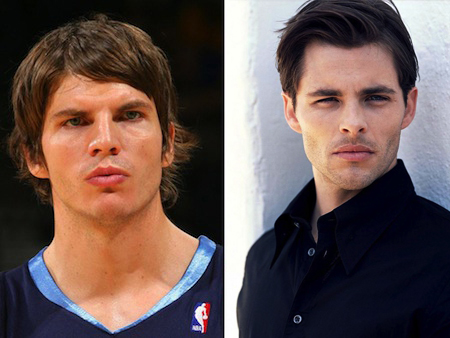 Coming in at #9 are two guys who aren't exactly household names, but who bear an uncanny resemblance to one another: the Chicago Bulls' Kyle Korver and Mr. Cyclopse (and currently Liz Lemon's boyfriend on 30 Rock), James Marsden. 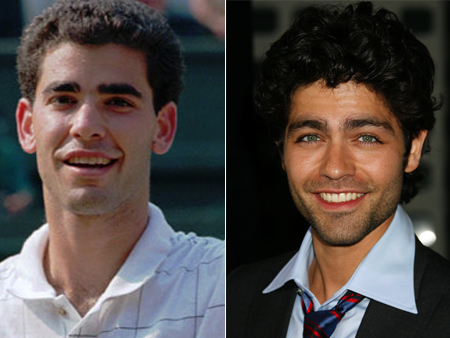 Now that Pistol Pete has lost the majority of those curly black locks, the resemblance between these two isn't as strong. But at least now Adrian Grenier knows what he can look forward to. 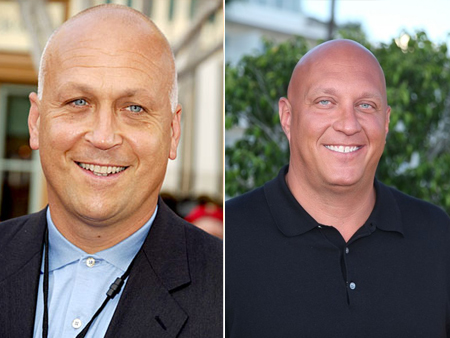 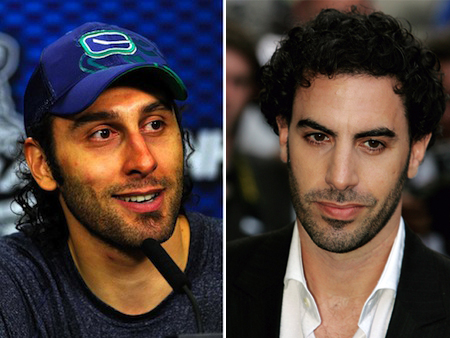 The Canucks goalie and Borat both have long faces and dark, thick facial hair. The only difference is that one is Italian, the other Jewish. Oh, and the hockey and the acting. 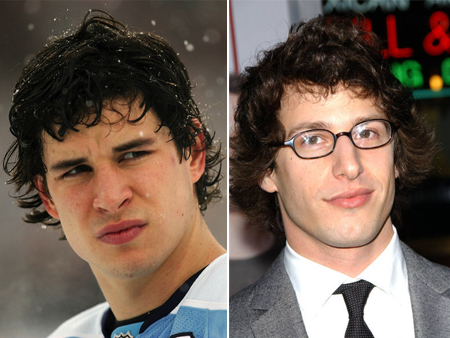 With Sidney Crosby and Andy Samberg, you've got two pasty guys with zero ability to grow facial hair. That's pretty much all you need for look-alikes. 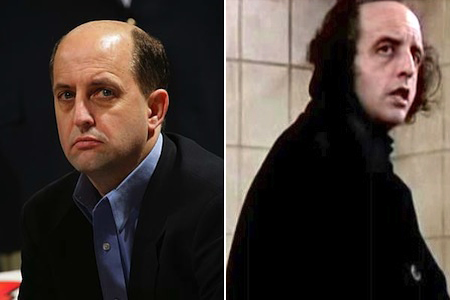 Unfortunately for this former coach of the Knicks and Rockets, the celebrity he most resembles is Vincent Schiavelli, a guy who is best known for being extremely weird-looking. You may remember Schiavelli as the angry subway ghost from the aptly named film, Ghost. Now, sadly, he is dead. (Schiavelli, not Jeff Van Gundy. He's totally fine.) 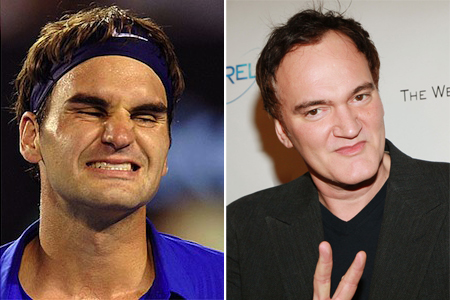 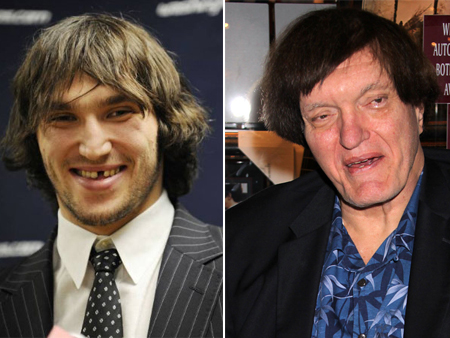 Rather strangely, Richard Kiel is best-known for two roles in two very different films. He was a Bond Villain named "Jaws" in The Spy Who Loved Me, and he was the creepy "Mr. Larson" in the goofy Adam Sandler golf flick Happy Gilmore.

And now you'll think of Kiel every time you see Alex Ovechkin. (You certainly won't think of awesome hockey, since Ovechkin has forgotten how to do that.) 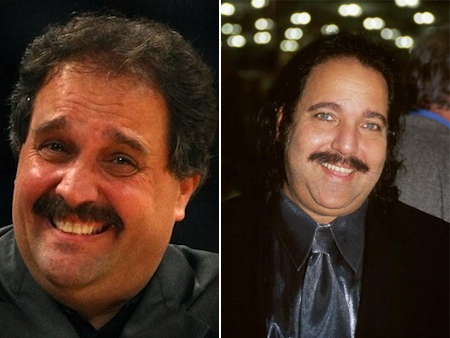 Stan Van Gundy is luckier than his younger brother, Jeff, because he's still employed and not nearly as weird-looking.