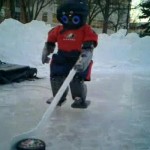 A few years ago it appeared as though Don Cherry was trying to make Alex Ovechkin into the first hockey playing robot when he criticized the Russian superstar for his over-exuberant celebrations.  Unfortunately for Cherry, his criticism fell on deaf ears, as Ovechkin’s goal celebrations continue to be as exuberant as ever, albeit a lot less frequent nowadays.

But while Cherry was unable to turn one of the league’s best scorers into a robot, his dream of seeing robots play the game of hockey may come a lot sooner than he or anyone else expected thanks in large part to the fine work of a few students from the University of Manitoba’s Autonomous Agents Laboratory, who created the following humanoid robot ice hockey player for 2012 DARwIn-OP Humanoid Appliance Challenge.

If the robot – which goes by the name of Jennifer – fails to win the challenge, its next step could be a try-out with the Montreal Canadiens.  With the team struggling and Andrei Markov having played only 52 games over the past three seasons, they could be in the market for a durable defenseman, and they don’t get much more durable than stainless steel robots.