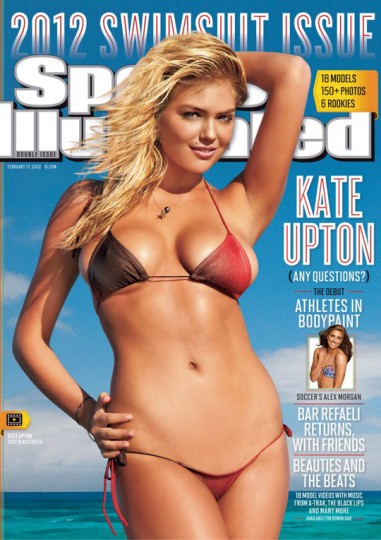 Kate Upton is one sexy woman with a killer body to match. You know that. I know that. Mark Sanchez knows that. And Sports Illustrated most definitely knows that.  That was evident when they named her as the “Rookie of the Year” when she appeared in SI’s Swimsuit Issue in 2011, and one year later it appears as though they still feel that same about the 19-year-old model, as she has been chosen to grace the cover of the 2012 Sports Illustrated Swimsuit Issue, which is set to hit newsstands today.

The cover was unveiled during “The Late Show with David Letterman” last night, and the fact that Kate Upton was chosen to appear on it shouldn’t come as a surprise to anyone who has watched the curvy blonde do the Dougie, milk a cow or play in the MLB Celebrity All-Star Game over the course of the past year.

Congratulations Kate!  I can’t wait to see those 33D’s on the nightstand next to my bed!