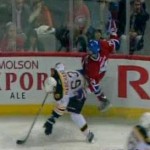 Brad Marchand is listed at just 5’9″, which is awfully small for an NHL player.  But at times it doesn’t appear to be small enough for his liking, as the Bruins’ super-pest has often displayed a knack for going low during checks in an effort to take out the knees of his opponents.

Daniel Sedin found that out during last year’s Stanley Cup Finals.  Sami Salo found that out earlier this season.  And during last night’s game between the Boston Bruins and the Montreal Canadiens, it was Alexei Emelin finding out that Marchand can be much shorter than 5’9″ at times.

The NHL has made it a primary focus to eliminate head-hunting in the game of hockey over the past year, or so.  But if they don’t do something to eliminate Marchand’s habit of knee-hunting, it may not be long before the players take matters into their own hands and get rid of it by eliminating Marchand from the game.

Here is a look at his latest attempt to take out the knees of an opponent.