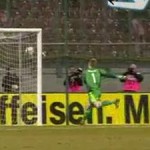 Scoring wasn’t much of a problem for the Austrian Men’s National Soccer Team during yesterday’s friendly against Finland.  That is largely because of the fact that their opponents were doing some of the scoring for them.  That was how Austria broke the nil-nil deadlock, as Marc Janko took a clearing attempt from the Finnish keeper off his groin before watching it bounce into the back of the net.

The Austrians would follow up that 32nd minute goal from Janko with two more in the second half, en route to the 3-1 victory.  They could have used more results like this one during their EURO 2012 qualifying campaign.  A few more gifts from opposing keepers, like the one they were treated to yesterday, probably would have helped.