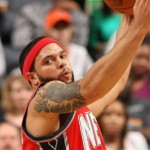 Choosing a “Stat Line of the Night” winner following yesterday’s action certainly wasn’t an easy thing to do thanks to two incredible performances from the hard-court.

In one corner we have the Boston Celtics’ Rajon Rondo, who recorded his second triple-double in three games after putting up an impressive 18 points, 20 assists and 17 rebounds during the Celtics’ 115-11 overtime victory against the New York Knicks.

And in the other corner, we have the New Jersey Nets’ Deron Williams, who recorded the highest point total for an NBA player during the 2011-12 season, as he put up 57 points to go along with 7 assists and 6 rebounds during the Nets’ narrow 104-101 victory over the Bobcats.

It was a tough decision, but in the end we had to go with Williams’ season-high point total for any NBAer, as he accounted for more than half of his team’s points on the night.   And despite doing all of that scoring, he somehow managed to find the time to throw seven assists into his stat line as well.