Watch The Most Disgusting Knee Injury In MMA History (Video) 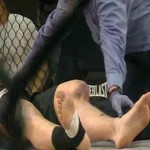 Many of you may be getting ready to sit down and eat dinner.  If that is the case, hopefully the following video doesn’t ruin your appetite.

It comes from a Cagequest 1 MMA bout between Justin Fowler and Brian Jones Jr this past Saturday.  Moments after the opening bell, Fowler attempted to slam Jones on his back.  Instead, he ended up slamming his opponent down on his leg awkwardly, resulting in an immediate stoppage to the fight and a stadium full of queasy onlookers.

Feel like sharing in their queasiness?  Check out the video below.  But don’t say we didn’t warn you!