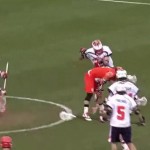 It has been a while since we showed you a highlight from a lacrosse game that didn’t feature a brawl, but with the NCAA Division I Men’s Lacrosse Championship Tournament only a few months away, that should change.  In fact, we aren’t even going to wait until then because we have a highlight reel goal to show you right now, thanks to the work of Syracuse’s Tim Desko during a game against top-ranked Virginia over the weekend.

Syracuse may have scored the prettiest goal of the game, but they didn’t score the most goals in the game, and unfortunately for them, that is what counts in the end.

Here is a look at Desko’s through-the-legs goal against Syracuse.