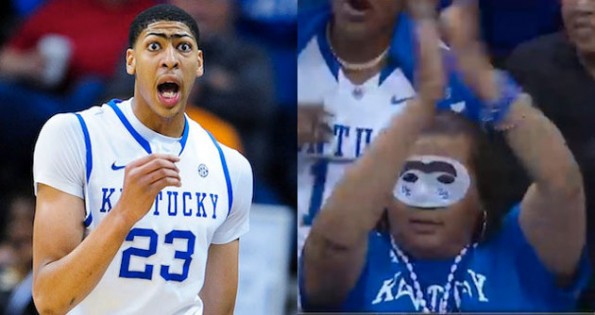 The power of the unibrow was in full effect at New Orleans Arena yesterday afternoon, as the SEC player of the year and future NBA No. 1 Draft Pick Anthony Davis wasn’t the only one sporting the singular eyebrow during Kentucky’s SEC Championship game against Vanderbilt.  Davis’ mother, Eranier, was also in attendance as she proudly supported her son with her very own hand-crafted unibrow mask.

While Davis’ unibrown did help power Kentucky to an incredible season and a number one ranking in the NCAA March Madness Tournament, it simply wasn’t enough to get them past Vanderbilt, as their undefeated season in SEC play ended with a 71-64 loss in the championship game.