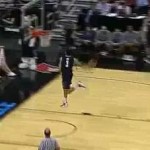 A miss on a breakaway windmill dunk during the final seconds of a 13-point loss to Iowa State in the opening round of the NCAA Tournament seemed like quite the appropriate way for the UConn Huskies to end their 2011-12 season.

A team stacked with talent, the Huskies simply couldn’t get the job done when it counted, finishing the year with a 20-14 record overall, and a disappointing 8-10 record in Big East play.  Their season came to an embarrassing end last night in Louisville, as a couple of Huskies players forced a needless turnover while the Cyclones attempted to run off the final seconds of the clock, resulting in the following missed breakaway dunk by Jeremy Lamb.

I know Jim Calhoun probably tells his players to play until the final whistle, but I think they could have ignored his advice in this instance.  They didn’t, and the result was this lowlight.