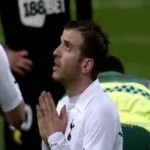 A scary scene unfolded at White Heart Lane on Saturday, as Bolton’s Fabrice Muamba suffered a heart-attack on the pitch during a match against Tottenham.

With time winding down in the game’s opening half, play was brought to a sudden halt when Muamba suddenly collapsed.  After showing one trainer attempt to roll the Wanderers’ midfielder onto his back, it became quite evident that this was a serious matter, as the cameras quickly panned away while several more trainers and medics rushed onto the field.  With players from both teams standing around nervously, medical personnel attempted to restart Muamba’s heart with a defibrillator.  Several minutes later, he was rushed off the pitch and taken to a London hospital, where his heart would eventually begin beating on its own.

After discussing the situation, officials decided to send the players to their respective dressing rooms before eventually canceling the remainder of the match.

Muamba remains in critical condition at the London Chest Hospital, but reports indicate that he has shown some improvement, as his heart is now beating without the help of any medication and he has been able to move his arms and legs.

Our thoughts and prayers go out to Muamba while the 23-year-old native of Congo continues to fight for his life.

Here is a look at the frightening scene that unfolded at White Heart Lane on Saturday.