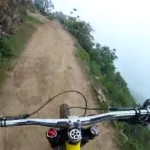 After making his way up the Andes with his mountain bike, there was only one way for Peruvian cyclist Alejandro Paz to make it back to the bottom.  That would be by riding his bike downhill at incredible speeds through the rock gardens formed by a mudslide.

I believe I counted at least ten instances when it appeared as though Paz would either fall off the side of the mountain or flip over the front of his bike and faceplant into a pile of jagged rocks.  Luckily for him, he somehow managed to avoid such a catastrophe, resulting in some rather remarkable footage that will likely have you on the edge of your seat.