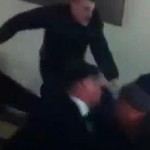 That dangerous combination was present during the Moscow derby between CSKA Moscow and Spartak Moscow over the weekend, as a crowded escalator quickly turned into a battle ground when fans from both teams began throwing punches and drop-kicks during their ascent.

Perhaps the most frightening part of this entire episode is hearing the screams from young children as these hooligans continue what we will assume was a meaningless fight that probably started over an argument regarding which team’s annoying chant is cooler.