This Cleveland Browns Fan May Be On To Something (Video) 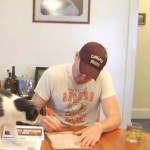 The fact that the Cleveland Browns suck certainly isn’t much of a secret throughout the sports world.  They haven’t made the playoffs since 2002 and their last division title came back in 1989.  They have become the epitome of futility in the NFL and this season-ticket holder is not going to stand for it any longer.

I would imagine that paying for season-tickets to watch the Browns lose on a consistent basis can be quite exhausting on one’s soul, so Mike Polk Jr. has taken it upon himself to “slightly alter” his season ticket package and payment plan.  Among his adjustments are a new $1 deal on pre-season games, and a plea for the organization’s returned “patience and loyalty” to him regarding his late payments.

Being from Toronto, I can see how some of Polk’s ideas could also work with the Raptors and Leafs season-ticket packages.  Rather than forcing those who want Leafs season tickets to also buy Raptors season tickets, how about lowering ticket prices to a number more reflective of the team’s performance over the past six seasons, and allowing fans to get their money back for all of the meaningless games they are stuck with once the club has officially been eliminated from playoff contention?

Or how about we scratch all of the above demands and ask for just one thing.  Playoffs?

Here is a look at this Browns fan’s letter to the team.