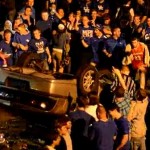 Kids these days will look for any excuse to start a riot.  They rioted in Vancouver after their Canucks lost Game Seven of last year’s Stanley Cup Finals to the Boston Bruins.  They rioted in London, Ontario a few weeks ago as part of their St. Patty’s Day festivities.  And on Saturday they rioted in Lexington, Kentucky following the Wildcats’ Final Four victory over Louisville.

Kentucky entered the NCAA Tournament as clear favorites to take it all, so we won’t blame the rioting on the overjoy of a shocking run to the Finals.  Instead, will chalk this one up as simply a case of “boys being boys.”  And thanks to video footage of the incidents that occurred on the University of Kentucky campus Saturday evening, we expect many of these “boys being boys” to become boys with court dates and meetings with the Dean.

In total, 27 arrests were made, and while we expect the police to be better prepared for whatever mayhem they may encounter following tonight’s final between the Wildcats and the Kansas Jayhawks, we would still advise against parking your car on the street near the Kentucky campus.  Those who choose to ignore such advice could find their car looking like the one in the video below.