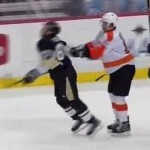 Mike Milbury spent 12 years as a player in the NHL and another six years as a coach and GM, however, not one of those took place while Sidney Crosby was in the league.

So why the beef Mike?

The former Bruins defenseman sounded off on Crosby during an appearance on a Philadelphia radio show following Sunday’s heated battle between the Flyers and the Penguins, as he blamed the Pens’ captain for the entire melee that unfolded with one minute remaining in the third period.

While discussing Crosby’s involvement in the matter, Milbury had the following to say:

“Little goody two shoes (Crosby) goes into the corner and gives a shot to Schenn.  Schenn was late to the party, I mean, he should have turned around and drilled him right away, but I guess better late than never.  So you know, Crosby gets cross-checked, big whoop, you know?  He said after he came back from his 35th concussion, ‘I’m not going to do this any more, I’m not going to get into these scrums, I’m going to stay away from that stuff.’ And he couldn’t help himself because there’s a little punk in Crosby.  He’s not the perfect gentleman. He’s not the sweet kid you see in interviews with his hat pulled down over his eyes.  I’d say screw him, hit him whenever you get the opportunity .”

Milbury has since reached out to the Penguins organization to apologize for his comments, but he certainly can’t take those words back at this point.

We remain unsure exactly why Milbury has such a strong sense of hatred towards Crosby and the Penguins.  Perhaps it has something to do with Crosby’s game-wining goal during overtime of the Vancouver 2010 gold medal final against the United States (Milbury is American).  Or maybe he is jealous of the Penguins organization because of their ability to keep top prospects like Sidney Crosby, Evgeni Malkin, Marc Andre-Fleury and Jordan Staal on their roster, rather than trading them away like Milbury was accustomed to doing during his time as GM of the New York Islanders (he traded away the likes of Zdeno Chara, Roberto Luongo and Jason Spezza, to name just a few).

Whatever the case may be, I suggest Crosby takes a page out of Patrick Roy’s playbook by claiming that he “can’t quite hear what Milbury is saying because he has his Stanley Cup ring and Olympic gold medal plugging his ears.”

You can listen to Milbury’s comments about Crosby in the video below.