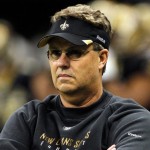 Now that punishments have been handed out to those involved in the New Orleans Saints’ bounty program, you can expect audio tapes, like the following one, to begin to surface over the next couple of months.

This one was recorded prior to the Saints’ Divisional Round playoff match-up against the San Francisco 49ers this past season, and it features specific instructions from Gregg Williams to injure several of the 49ers’ players, including Alex Smith, Frank Gore and Vernon Davis.  Here are a few notable comments made by the former Saints defensive coordinator to his defensive players:

“We don’t f*ckin’ apologize for how we’re going to play.”

“Kill the head and the body will die.”

“We’ve got to do everything in the world to make sure we kill Frank Gore’s head.”

“We hit f*ckin’ Smith right there (while pointing at Smith’s chin).”

And that was only the beginning, as he also instructed his players to test Kyle Williams’ concussion, aim for Michael Crabtree’s ACL, and attempt to injure Vernon Davis’ ankle by bull-rushing him into a pile of players.

I’m going to go out on a limb here and assume that this can’t be good for Sean Payton’s upcoming appeal, or Gregg Williams’ chances of coaching in the NFL again anytime soon.

You can listen to the audio below, but due to the abundance of expletives, this may be NSFW.