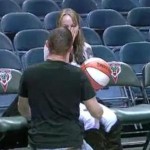 If you really love your girlfriend, you will probably propose to her someday in a romantic way, like under a candlelight dinner, during a trip to Paris or with Magic Johnson by your side, to name just a few examples.  And if you aren’t so fond of your girlfriend and are looking to propose in hopes of her declining your offer, you may want to put together some cheesy proposal that involves Luc Mbah a Moute rolling a ball to your woman with the words “Will you marry me” written on it.

One man did just that last night prior to the Bucks’ home game against the Cleveland Cavaliers, and if a rejection from his girlfriend was really what he wanted, he must have been awfully disappointed to see those tears roll from her eyes as she said “yes” to his proposal.

If Luc Mbah a Moute’s presence and a game between the Bucks and the Cavs wasn’t enough to scare this woman away, it is probably safe to assume that she isn’t leaving her soon-to-be husband anytime soon.