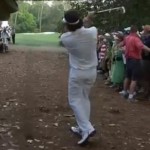 Some of golf’s greatest memories always seem to be created at Augusta National Golf Course during the final round of the Masters, and this year’s tournament was certainly no exception, thanks to Bubba Watson.

After Watson and Louis Oosthuizen recorded final rounds of 68 and 69, respectively, the two golfers found themselves deadlocked at -10 for the weekend, forcing a sudden death playoff.  Both golfers would par the first hole of the playoff round (18th hole), setting the stage for a magical shot from Watson during his second shot on the second playoff hole (10th hole).

With Oosthuizen’s approach coming up short of the green, Watson knew that if he could land his second shot on the putting surface, he would have a great shot at winning his first career Green Jacket.  The only problem was his tee shot ended up in the pines well right of the fairway.  That forced the 33-year-old to combine his skill and creativity in order to deliver one of the greatest shots in Masters history, as he hooked his approach around a set of trees and landed it safely on the green.  He would two-putt from there to earn himself the victory and a place in history.

So does this mean we can expect a live performance from “The Golf Boys” during next year’s Champion’s Dinner at the Masters?  I guess we’ll have to wait and see what Bubba has in store for that special evening.

Here is another look at Watson’s incredible hook shot from the pines.