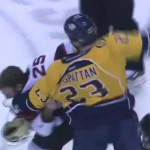 It was an entertaining 2011-12 NHL regular season that was filled with plenty of exciting fights, but their were four bouts over the course of the past seven months that stood out above the rest.  Of those four fights, we were forced to chose only one for this year’s edition of the “Frozen Fisticuffs Fight of the Year.”  After looking at the videos below, it will become quite clear that picking a winner this time around was no easy task, but we think we made the right decision.

Here is a look at the four nominees:

Cam Janssen and Brian McGrattan for their epic exchange of blows on October 15, 2011.  Congratulations to both combatants on this well deserved honor.  Hopefully they, and the rest of the NHL’s enforcers, can keep the fists flying during the 2012-13 NHL season.