UltimateBall Is Like Rugby In An MMA Cage (Video) 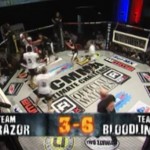 Mixed martial arts and rugby are two of the most physical sports I can think of, but what happens when you combine them both?  You get a free-for-all sport by the name of UltimateBall, which pits two teams of four against one another as they attempt to score on the opposing team’s net while avoiding the punches, kicks and takedowns that we are accustomed to seeing during a typical MMA bout.

Created by the people from Ultimate Challenge MMA, UltimateBall certainly has all of the tools to make it a popular sport in America (plenty of blood, violence and scoring).  Whether that will be enough to allow it to flourish on a national – and eventually, international – level remains to be seen.

You can watch the first ever UltimateBall match between Team Razer Vs Team Bloodline in the video below.