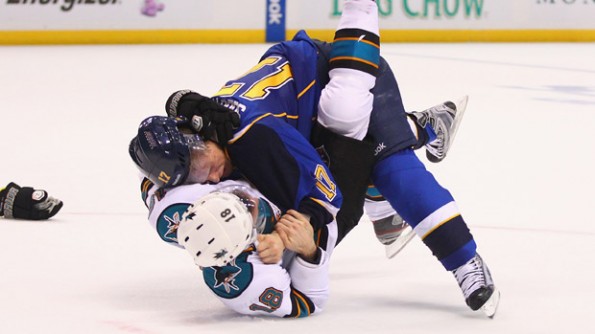 For the past two years I have chosen to discontinue the “Frozen Fisticuffs Fight of the Night” segment during the NHL playoffs because as many of us already know, fights rarely, if ever, take place during the post-season.  However, that has been far from the case during the 2012 NHL playoffs.  In fact, all of the nastiness that we have witnessed throughout the past week has me thinking that a potential “Frozen Fisticuffs Fight of the Year” may end up taking place at some point over the course of the next couple of months.

On second though, some may argue that a few possible candidates have already taken place over the past weekend, as several fights and cheap shots highlighted Saturday and Sunday’s playoff action.

Let’s begin with Saturday night’s game in New York, where two suspensions were handed out following Game 2 between the Rangers and the Senators.

After watching their All-Star defenseman, Erik Karlsson, take several punches to the head from Brian Boyle during Game One of the series, Matt Carkner retaliated in defense of his teammate by unloading a flurry of punches to the face of an unprepared Boyle during Game Two.  That earned the Sens’ enforcer a total of 17 penalty minutes on the play, as well as a game misconduct and a one-game suspension.

And that wasn’t the end of the nasty play at Madison Square Garden on Saturday night, as Carl Hagelin was handed a five-minute major for elbowing, and a subsequent three-game suspension, following this nasty elbow to the head of Daniel Alfredsson.  The Sens captain left the game and did not return following the hit, and his status for Game 3 tonight remains questionable.

Later on in the night, the St. Louis Blues and the San Jose Sharks engaged in some nastiness of their own, as Brent Burns and T.J. Galiardi of the Sharks each delivered questionable hits on Scott Nichol and Andy McDonald of the Blues, respectively.

But the Blues would get the last laugh, as they earned the 3-0 victory to tie the series at 1-1, and at the end of the game they dished out some physical retribution as well, as Vladimir Sobotka broke the nose of the Sharks’ Dominic Moore, while Roman Polak laid a beating on the face of Justin Braun.

And finally, we bring you to yesterday afternoon’s gong show between the Philadelphia Flyers and the Pittsburgh Penguins.

Many anticipated that this series would be the roughest of the eight opening round match-ups following what unfolded during an April 1st meeting between these two teams.  And after accumulating only 24 minutes in penalties during the first two games of this series, the hatred between these two rivals took over in Game 3, as a total of 158 penalty minutes were handed out during this fight-filled affair.

Suspensions could be handed out to Arron Asham and James Neal for questionable hits by both players.  And it was Neal’s consecutive hits to the head of  Sean Couturier and Claude Giroux that sparked the following melee.

Some believe that the nastiness displayed over the course of the weekend could be the result of Brendan Shanahan’s leniency towards Shea Weber while dealing with his turnbuckle head-smash on Henrik Zetterberg, while others simply feel as though we are revisiting the 1980s with this take-no-prisoners style of playoff hockey.  Whatever the case may be, there is no doubt that this rough, nasty brand of hockey is awfully entertaining to watch, but if it is going to come at the expense of a superstar’s health and well being, I’ll take the fast-paced, cleaner, fight-free style of hockey instead, thank you very much.