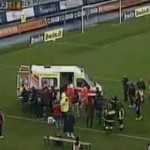 Tragedy has stuck the sporting world once again.

During an Italian Serie B soccer match between Livorno and Pescara, a frightening scene unfolded on the pitch, as Livorno’s Piermario Morosini collapsed while suffering a cardiac arrest during the 31st minute.  The medical staff quickly rushed onto the field in an attempt to resuscitate the 25-year-old, but to no avail.  Reports indicate that Morosini was conscious as he was being rushed onto the ambulance, but approximately one hour after arriving at Santo Spirito Hospital, he was pronounced dead.

This shocking incident comes just one month after Bolton’s Fabrice Muamba suffered a near-fatal heart attack during an English Premier League game against Tottenham. Muamba was in critical condition at the time, but his recovery has gone well and the 23-year-old is expected to be discharged from the hospital within days.

Unfortunately, Morosini’s story does not have the same happy ending, as his death has sent the Italian football world into a state of shock, causing the Italian FA to call off all of the weekend’s football matches, including all Serie A games scheduled for Saturday and Sunday.

Morosini lost his parents and his brother when he was younger, and now with his passing, Udinese – who loaned his services to Livorno – has promised to take care of his disabled sister.

“We know the situation of his sister and we as a team, the club, and Udinese for Life have decided to help her because she is in real need,” Antonio “Toto” Di Natale told the club’s TV channel. Udinese for Life is a medical charity linked to the club.  [Caught Offside]

It is a classy act by the Serie A club, but sadly, it comes at a time when the rest of the football world is in mourning, as many of those involved in the sport now find themselves wondering whether anything can be done to prevent these types of tragedies from reoccurring on the pitch in the future.

Our thoughts and prayers go out to the family and friends of Morosini.

Here is a look at the frightening incident that unfolded during Saturday’s game at Pescara’s Adriatica Stadium.