This past Saturday was “Ring Day” at Busch Stadium in St. Louis—the day every member of the 2011 St. Louis Cardinals (plus every other employee of the franchise) had been waiting for since the team won its 11th World Series Championship back in October. And as it turns out, it was well worth the wait. Rubies, diamonds, white gold, yellow gold, rally squirrel—the Cardinals’ newest World Series ring has everything today’s superrich prima donna athlete could ever want.

What do you think? 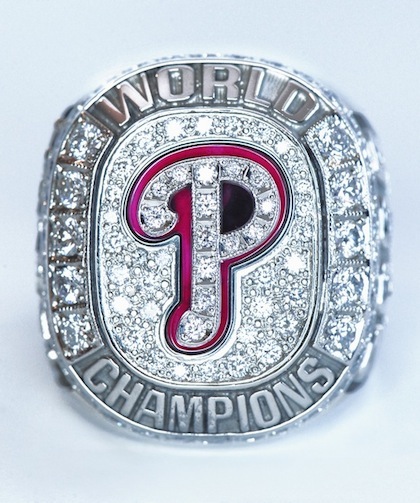 The 2008 Phillies got it right with this ring. It’s got a ton of diamonds, but they keep the design simple—so it’s classy, not gaudy. Well, not gaudy by championship ring standards. It’s still pretty gaudy by everyday accessory standards. I mean, this ring is pretty much the size of a lime. 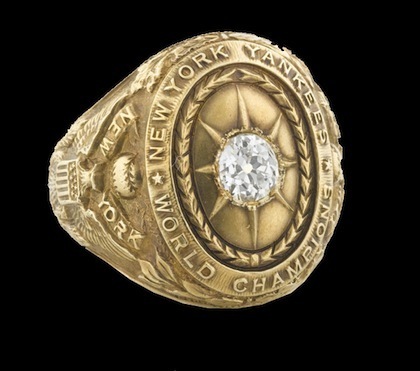 Prior to 1922, most teams gave their players things like pins, pendants, and fancy gold pocket watches as mementos of their championships. The one exception was the 1914 Boston Braves, who gave their players rings. The Giants brought the World Series ring back for an encore in 1922, then the Cardinals gave out rings in 1926. But of course it was the Yankees—who else?—who took the World Series Championship ring to a new level with this bad boy in 1927. I guess they figured, with a lineup nicknamed “Murderers’ Row,” they needed some pretty badass jewelry. 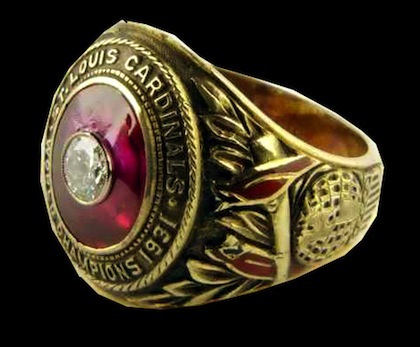 The 1931 Cardinals World Series rings were the first to include the team’s colors—a nice innovation. They also made excellent use of the side sections by including the iconic birds on the bat logo. The Athletics had included their logo—an elephant—on two of their rings, but they were pretty goofy looking. This one actually looks nice by today’s standards. 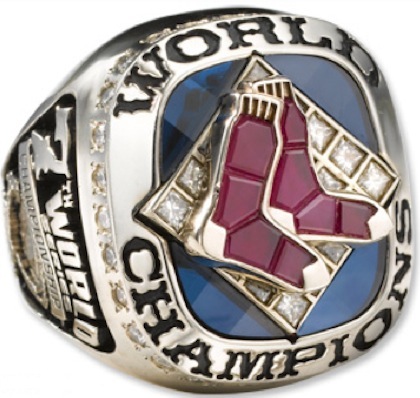 This fairly simple ring wouldn’t be all that noteworthy if not for the way it includes the team colors with sapphires and rubies. Forming team colors and logos out of precious stones is always a plus in my book. 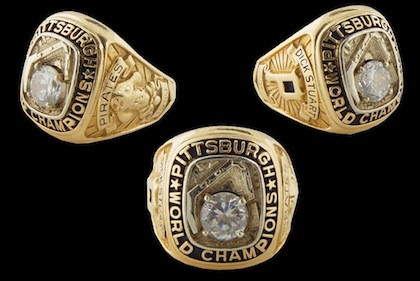 These rings commemorating the Pirates’ thrilling 1960 World Series Championship over the New York Yankees (the only World Series to end with a walk-off homer in Game 7) aren’t very blingy by today’s standards. But they do feature excellent design and craftsmanship. I mean, check out that 3D relief of Pittsburgh’s historic Forbes Field right there on the top—totally awesome. Throw in a sweet pirate there on the side for good measure, and this is one terrific ring if you ask me. (You did ask me, right?) 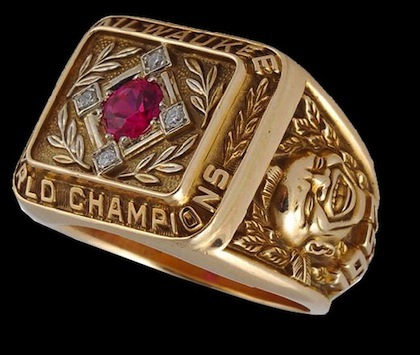 The design and craftsmanship of this 1957 Milwaukee Braves ring is great: baseball field made out of a ruby and four diamonds, intricate details, awesomely racist Indian Brave head on the side, and so on. But it really gets bonus points for bucking convention and going with the rectangular shape. Most of the rings that “bucked convention” turned out terrible, so it’s nice that the Braves pulled it off. 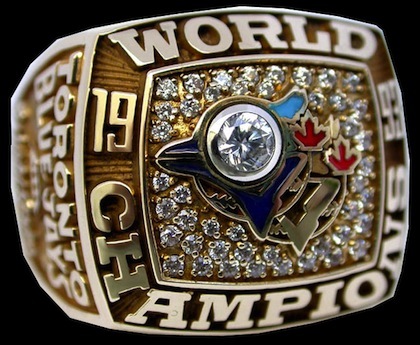 The Jays 1992 World Series ring had a single gold Blue Jays logo in the center. So obviously, when they won it all again in 1993, the new ring featured two Blue Jays logos in the center...and a much bigger diamond giving the Blue Jay a big bulging eye. It was very unique for it’s era (pretty much all the rings back then looked alike) and, all in all, it still looks pretty sharp. 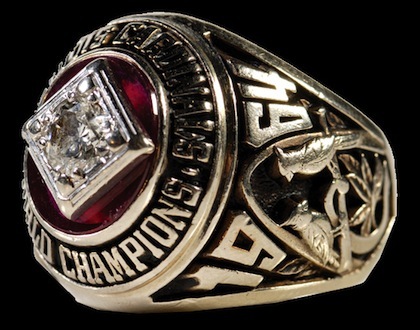 Not only does this ring feature a pretty big diamond set in a bright cardinal red ruby, but it also has the birds on the bat logo sitting underneath the iconic St. Louis Gateway Arch (which wasn’t even completed until October of 1965...I looked it up). These touches really give the ring a lot of character. 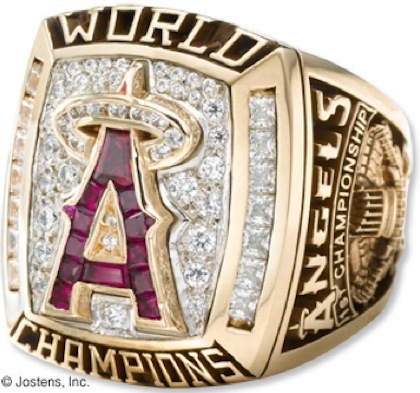 Lots and lots of diamonds. Team logo made out of rubies. Highly legible relief sculpting on the side. The Angles 2002 World Series ring doesn’t push any new boundaries, but they made it distinctive while keeping things classy. So it gets a solid B from me.

Coming in at #6 is another ring that’s not particularly blingy by today’s standards, but which features excellent design and craftsmanship. I love the symmetry, the way the block lettering pops out, the stadium on the top of the ring, and the American League logo on the side (which teams don’t seem to include much anymore). Moreover, when I saw this, my first impression was that this is a very manly looking ring. 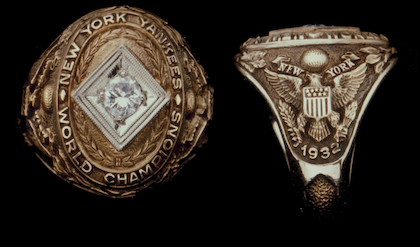 At #5 we have the ring I already mentioned when discussing the Cardinals 1931 rings. The Yankees 1932 World Series rings are not only exquisitely ornate, but they also became the standard design for over half (45) of the World Series rings ever produced. This was the first ring to feature an actual diamond set inside a baseball diamond. And after the Yankees won a bunch more championships and produced a bunch more rings that looked pretty much just like this one, this became the standard design most teams went with after winning a championship. I guess everyone just wanted to be like the Yankees. 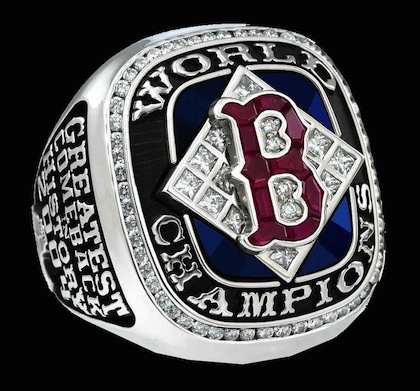 I did not take the historical nature of a given World Series into account in compiling this list. I just looked at all the rings, made a note of which ones stood out immediately, then went back and looked more carefully to come up with my Top 15. So the 2004 Red Sox World Series did not make the Top 5 because of the historic nature of their victory. It made the list because it just looks damn sharp. 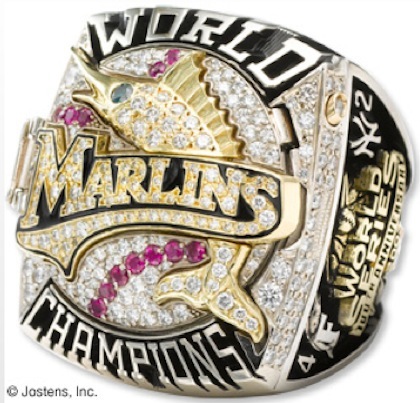 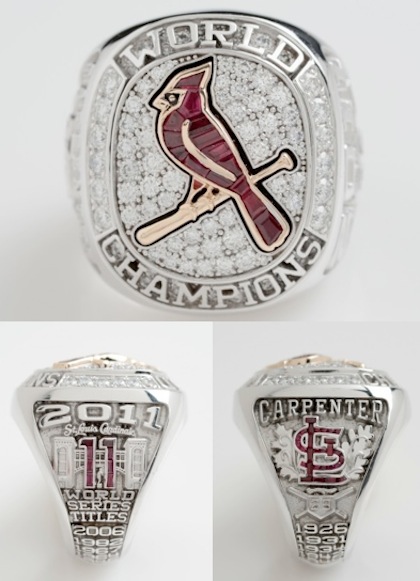 I know it’s early to proclaim the Cardinals’ new World Series rings the second greatest of all time, but I just can’t help it. I think they’re awesome. I love all the diamonds; I love the cardinal made out of rubies; I love the picture of the stadium and the “11” in rubies on the side; I love the listing of the franchises World Series titles on the underside; and, last but not least, I love the subtle yet noticeable rally squirrel. It’s just a totally unique ring. 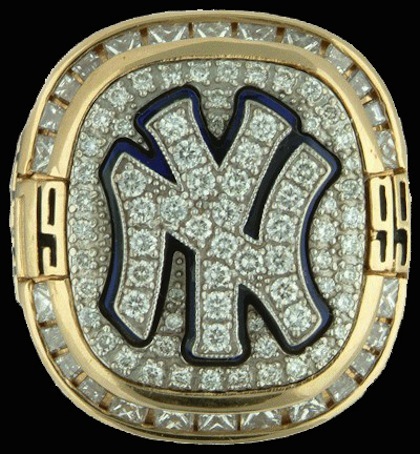 Ugh. The Yankees. I didn’t want them to have the #1 ring either. But what can I say? This one just has too much regal bling to ignore. It’s so simple, yet so ridiculous. Some of the other recent Yankee rings are a little too busy for my taste, but this one from 1999 is perfection. PS, if it seems like there are a lot of Yankees and Cardinals rings on this list, that’s because there are. But it’s not because I prefer these teams. It’s simply because those teams have combined for 38 World Series Championships. And when you get that many swings, you’re sure to knock a few out of the park.