All 10 Penguins Goals From Last Night In One Minute (Video) 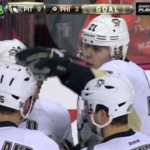 The Penguins knew they would need to score early and often if they were going to stay alive in their best-of-seven Eastern Conference Quarterfinal series against the Philadelphia Flyers.  They would do just that, beating Ilya Bryzgalov and Sergei Bobrovsky five times each during their 10-3 blowout victory last night.

With a total of 36 shots on the Flyers’ goal, Pittsburgh scored on 27.8 percent of them in Game 4.  Their power-play was an impressive 4-for-9, and they also scored each of the game’s final eight goals, beginning with Sidney Crosby’s tally 16:19 into the first period.  Jordan Stall was leading the Penguins’ offensive charge with three goals, while Evgeni Malkin recorded two, and Crosby, Matt Niskanen, Kris Letang, Steve Sullivan and Pascal Dupuis all chipped in with one goal each.

The win still leaves the Penguins down 3-1 in the series, and just one loss away from booking their first tee time of the year, but if goaltender Marc-Andre Fleury can continue to limit the Flyers to three goals-per-game, the Pens have proven that they can at least equal that amount, as they have done so in each of the first four games in this series, despite losing on three of those occasions.  Coming back from a 3-0 series deficit is no easy task, but with goaltending still a glaring problem in Philadelphia, mounting this historic comeback may also not be as hard as you’d think…

…Especially if the Pens can continue to make it look this easy.  Here is a look at all ten of their goals from last night.