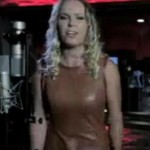 Some women have shown that they are capable of translating their good looks (and a bit of athleticism) into a successful career in sports, while other women have used their looks to advance their singing careers.

Some may argue that the WTA’s sixth-ranked tennis player, Caroline Wozniacki, is a perfect example of the former, as she has yet to win a women’s Grand Slam title during her professional career, but has still gained recognition as one of tennis’ most popular female stars.

As for Caroline’s singing career, I wouldn’t expect it to experience the same type of success as her tennis career has endured.  After all, not even her good looks and some auto-tune is enough to overcome her deficient vocal cords.

You can hear exactly what I am talking about via her newly released single, “Oxygen.”  Check it out.