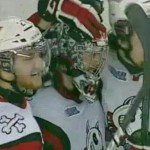 Niagara IceDogs goaltender Mark Visentin has been doing it all between the pipes during his team’s impressive OHL Playoff run, as he has put together a 10-3 record to go along with 2.49 GAA and 0.918 save percentage.  And during Game 3 of the IceDogs’ Eastern Conference Championship series against the Ottawa 67s, he added a goal to his impressive playoff stat line.

With only 40 seconds remaining in the game and the IceDogs leading 4-2, Visentin corralled the puck behind his net and sent it the length of the ice for his first ever OHL goal.  That empty-net marker secured the 5-2 victory for Niagara, giving them the 2-1 series lead.  It also moved Visentin ahead of five of his teammates in playoff scoring.

Surprisingly, this isn’t even the best highlight Visentin has provided us with this season.