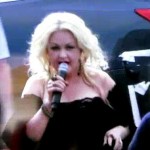 Hearing that I’ll Have Another won the 138th running of the Kentucky Derby on Saturday at 15-to-1 odds was surprising for some.  Equally surprising were the words coming from the mouth of Cyndi Lauper during the 2012 Pegasus Parade on Thursday, which is just one of the many events that takes place in Louisville, Kentucky, as part of the pre-race festivities.

After appearing on scene with her funny looking outfit and a face full of bright red lipstick, Lauper took the microphone from one of the roadies and yelled “hey” into it before saying “of course it’s not on, f*cking idiot.”  Only problem for her was the microphone was on!   And apparently everyone could hear it, except for her.

As the guys at Sucker Punch have already asked, “who’s the f*cking idiot now Cyndi?”