The 21 Goofiest Hats At The 2012 Kentucky Derby

Every year on the first Saturday of May, millions of people who otherwise have no interest in horse racing suddenly become captivated by so-called “most exciting two minutes in sports”—the Kentucky Derby. This past Saturday’s event, won by I’ll Have Another, was the 138th “Run for the Roses,” and it was certainly huge pop culture event.

So what’s the big deal about the Kentucky Derby?

Well, some would say that people are enamored with all the history and pageantry of Churchill Downs. And this is probably true. A lot of people probably do love the romance and charm of the Kentucky Derby, with its seersucker suits and straw hats. But personally, I think the main answer is actually a little simpler than that. I think most people just love an excuse to drink in the afternoon and wear silly hats. In this sense, the Kentucky Derby is really just St. Patrick’s Day with jockeys and mint juleps instead of leprechauns and Guinness.

Today, in honor of the most famous horse race in the world (or so we assume here in North America), let’s take a look at the goofiest hats spotted over the weekend in Louisville, Kentucky. Some are trying to be classy; others are just trying to be seen. But regardless, they’re all pretty hilarious. 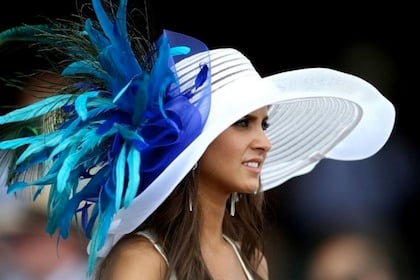 Can't decide between two hats? Just have your hat guy hot glue one to the other and—boom—super awesome megahat. 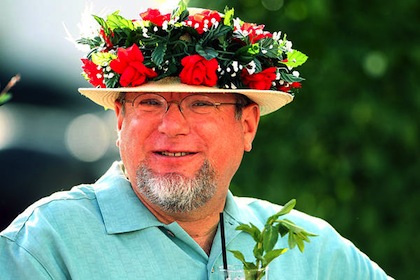 Hey, who knew the Ghost of Christmas Present was a fan of horse racing? 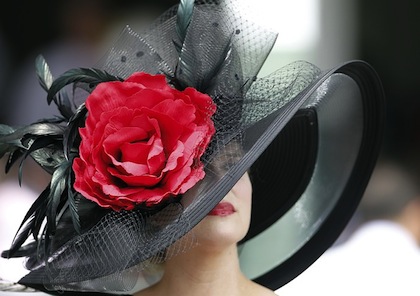 Is it just me, or does this hat seem a little dark and serious for a fun, lighthearted event like the Kentucky Derby? 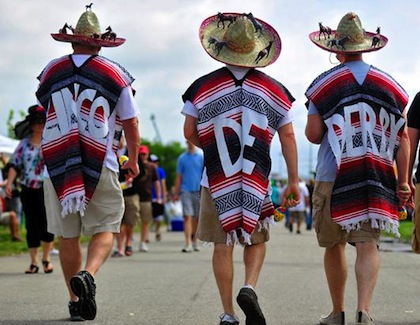 This year the Derby fell on May 5, so of course you knew there would be a number of Cinco de Mayo-themed hats. (Like I said, people love any excuse to wear silly hats and drink in the afternoon.) 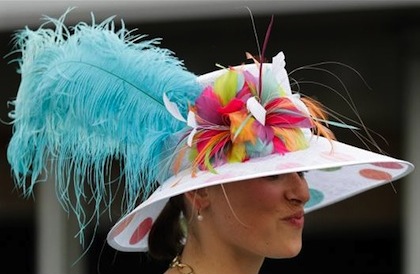 This Yankee Doodle may not be riding on a pony, but her money is. So yeah, we'll call this hat macaroni. 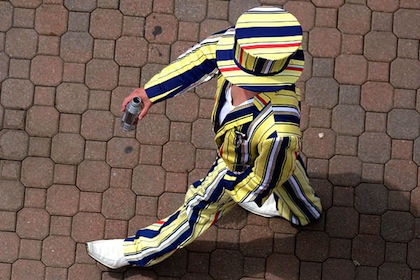 This hat would still be pretty great without the matching suit. But the suit helps. 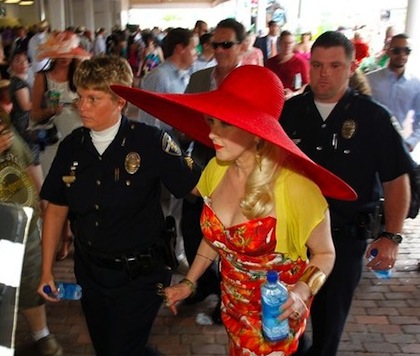 Cyndi Lauper shows up to Churchill Downs in a hat that doubles as an umbrella. 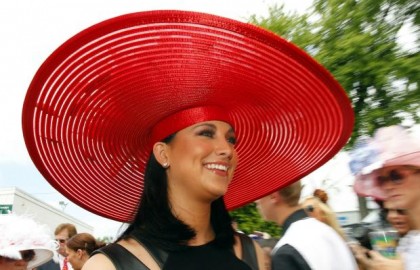 This is Laura Kaeppeler, the reigning Miss America. Her hat looks like Cyndi Lauper's after the wind has blown it inside out. 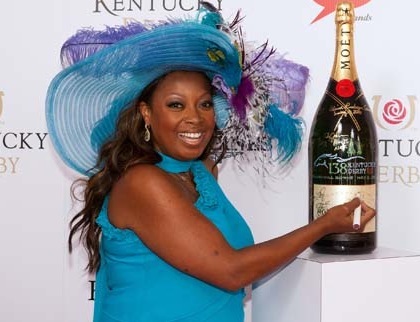 The hat sported by this former host of The View features one of the busiest arrangements of plumage at this year's Derby. Obviously, it's not really working for her. 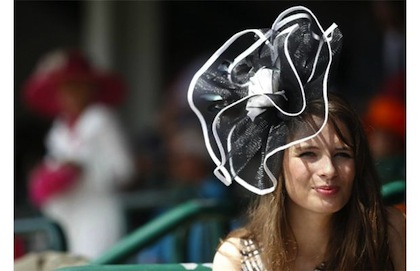 Is this a hat, or an oversized hair clip? (Yes, I realize there's probably a name for this type of headgear. I'm not going to look it up because I don't want that information taking up space in my brain.) 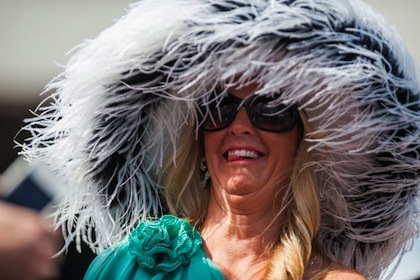 I bet this woman was just delighted when she discovered that this photo of her was all over the internet on Sunday. You know, because it's so flattering and whatnot. 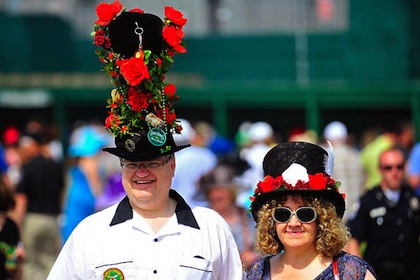 You want to know the crazy thing about this guy? He apparently wears this hat to the Kentucky Derby every year. There are numerous photos of him wearing this hat, but with different clothes. I guess he figures why mess with success. 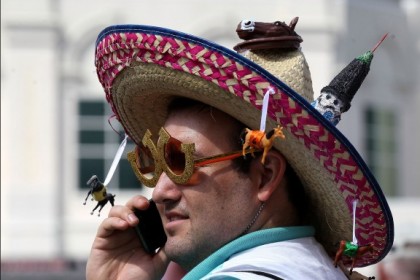 I like how the guys up at #18 have horses racing around their sombreros, but this guy has horses dangling from his sombrero, plus a miniature Churchill Downs steeple and some wacky horse show sunglasses. So in other words, he took the Cinco de Mayo them up a notch. 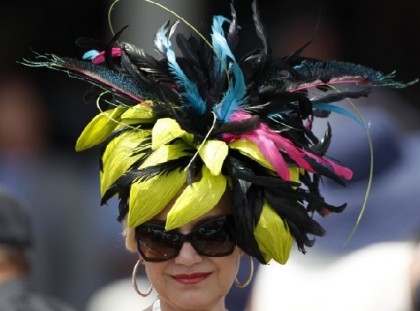 I wonder if any exotic birds swooped down and tried to get busy with this lady's head. 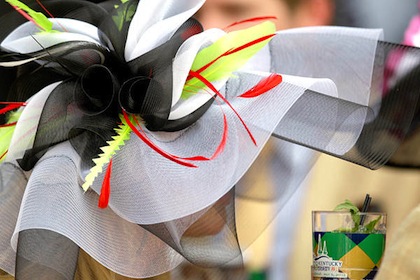 Ever been to the Bellagio in Las Vegas and seen the huge glass sculpture ceiling by Dale Chihuly? That's what this reminds me of. 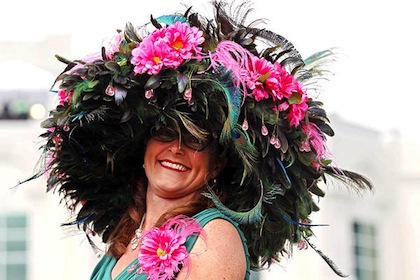 How many poor innocent peacocks lost their beautiful feathers so this lady could wear this ridiculous hat to the Kentucky Derby? 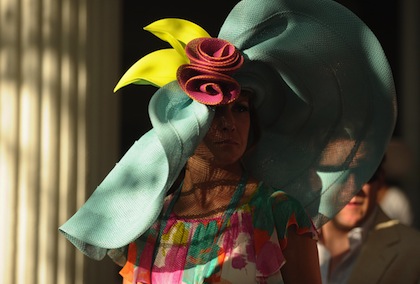 This may be the largest hat worn at the 2012 Kentucky Derby. I hope whoever sat behind this lady was wasted, because they sure as hell didn't see no horse race. 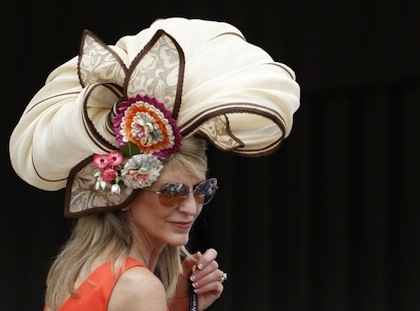 Methinks the lady would fit right in at a Renaissance fair. 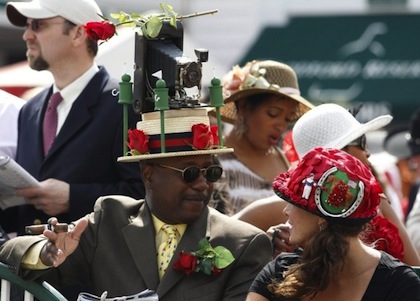 At #3 we get a two-fer. The dude's camera hat gets top billing, but the lady's whatever-that-is hat is also quite the spectacle. Together, they're an amazing pair. 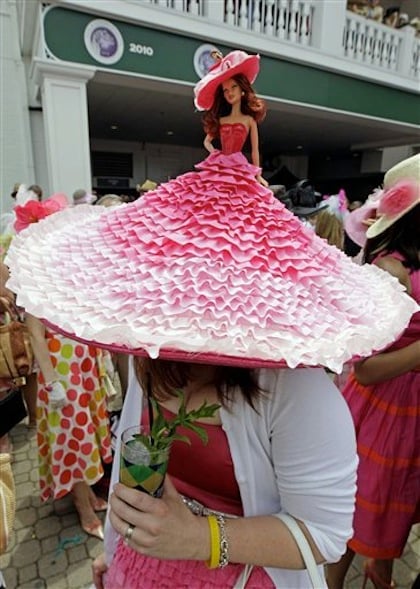 The woman wearing this hat is from Las Vegas, and her name is Alison Callaway. (Note to self: if at Kentucky Derby wearing silly hat, never give name/personal info to photographers taking photos. Potential embarrassment.) 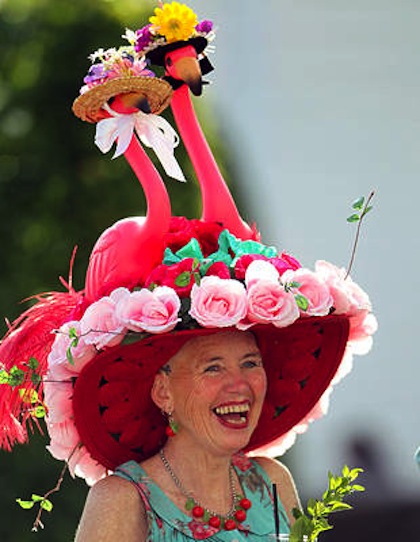 A couple years back this woman wore a hat with one flamingo to the Kentucky Derby. This year she figured it was time to up the ante. So she went with two flamingos. It's a good thing, too. Without that second plastic bird, this lady wouldn't have cracked the top five.