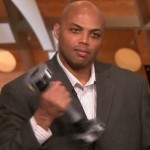 Hey, did you watch Game 2 of that Pacers-Heat playoff series the other day? Because I did, and it was revolting. Not the game itself, mind you. That was great—Indiana won 78-75.

No, I’m talking about Charles Barkley’s use of a shake weight during the halftime show. Totally uncalled for. And the funny thing is, this isn’t the first time Sir Charles has picked up a shake weight and given it a jacking during an NBA broadcast. We’ve seen this before.

In case you missed it, here’s an animated GIF version of the, uh, incident:

Gonna haunt you in your dreams, isn’t it?