We have this romantic notion (usually propagated by Gatorade commercials) that the bodies of professional athletes are high-performance machines that require meticulous maintenance and high performance fuels to achieve peak performance. And for some athletes this is true. In fact, some are so particular about the foods they put in their bodies that you might say they’re a little obsessed. But then there are others at the opposite end of the spectrum—dudes who make millions of dollars playing sports but put nothing but junk in their bodies.

The point is, whether they’re health-crazed weirdos or fast-food connoisseurs, professional athletes can actually have pretty strange eating habits. So today, lets have a look at some of the most famously bizarre athlete diets. 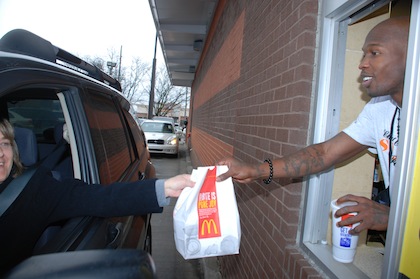 Ochocinco isn't ashamed of his "poor" eating habits. The guy loves McDonald's—practically survives on it—and he isn't ashamed to admit it. He says as long as you work out "like you're supposed to" you can eat whatever you want. Yeah, well, we'll see what his arteries have to say about that philosophy in 15 years or so. 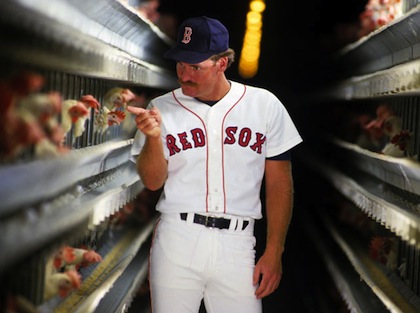 Baseball Hall of Famer Wade Boggs is famous for four things: mustache, hits, beer, and chicken. The first two speak for themselves. The last two? Well, let's just say Boggs is a legend among pro baseball players for his ability to consume suds. One story has it that Boggs once drank 40—no, it was 50...wait, no, 60—beers on a team flight from Boston to California. (I assume the numbers are exaggerated, but like all myths, this one speaks to a general truth.) As for the chicken, the dude used to eat one every day before a game. Like, a whole chicken. 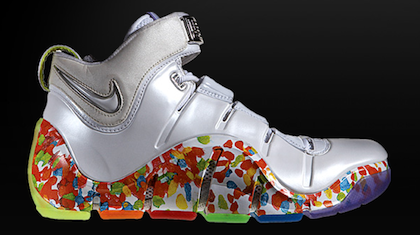 When I was a kid my mom would never let me have the "good" serials like Lucky Charms or Count Chocula. She'd be all like, "it's like eating candy for breakfast," and I'd be all like, "yeah, duh, that's the point." LeBron James' mom didn't have any such hangups. Her kid was a basketball prodigy, so I guess she figured, let him eat whatever the hell he wants cause he's gonna buy me a big-ass house one day. So LeBron developed a legendary love for Fruity Pebbles. In fact, he loves the sugary breakfast cereal so much that Nike actually made a Fruity Pebble LeBron shoe for him. Unfortunately, it was never released to the general public. 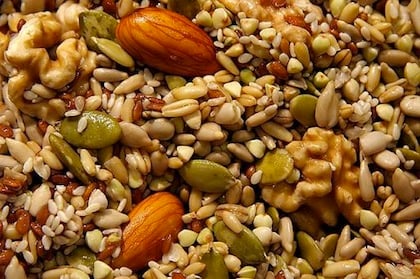 Steven Nash is Canadian. So what's his weird eating habit? Moose? Beaver? Nope. It's nuts. In fact, the guy is...well, nuts for nuts. And seeds. The guy has been known to expound at length on Facebook about their dietary benefits. For example: "A large portion of my diet consists of nuts and seeds. They're a really nutritious snack. When eaten raw or after being sprouted they contain some vitamins and trace minerals while also high in fiber, protein, and healthy fats. I try to avoid roasted and salted nuts, although, sea salt can be beneficial. My favorites are almonds, cashews, and pistachio's..." OK, Steve, Whatever. 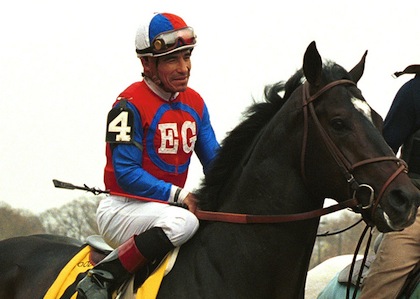 Laffit Pincay Jr. is the winningest jockey of all time, and has won both the Belmont Stakes and the Kentucky Derby. Unfortunately, it takes some obsessive discipline to stay jockey-sized. Rumor has it that, at one point, Pincay was allowing himself to eat just one half of one peanut per day. Later on in his career he really let go, however, eating a whopping 815 calories per day to stay at his ideal riding weight of 117 pounds. 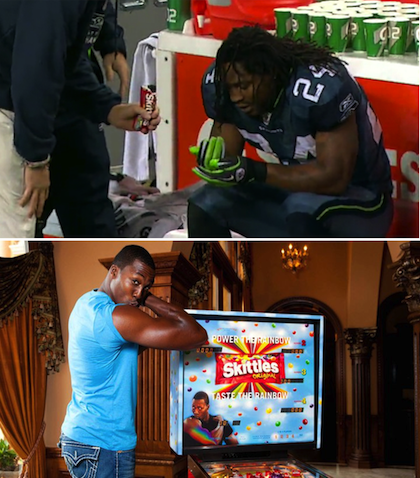 These dudes love Skittles. Lynch guzzles them down on the sidelines of Seahawks games in between offensive possessions, and they give him the rush of energy he needs to break defensive lines. Howard...well, he just eats a lot of them. Both eat so much Skittles—wait, is it "so much Skittles" or "so many Skittles"?—that the candy company gave them personalized Skittles vending machines. Actually, Howard's is really a Skittles-dispensing pinball machine. 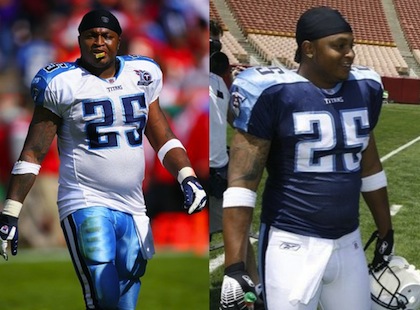 LenDale white used to be the fattest running back in the NFL. Why? The guy drank Patron like a fish drinks water. Well, maybe not quite. Let's say he drank Patron like a Walmart shopper drinks Pepsi. And though most people don't realize it, tequila—high end or otherwise—is packed with calories. When tubs cut the liquid golf from his diet and lost 30 pounds. As White explains, "I was a big Patron consumer. ... That's what it was. I was drinking a lot, drank a lot of alcohol. I cut that out of my diet all the way. I don't drink at all. I cut the drinking, I stopped drinking for six months. It started falling off." 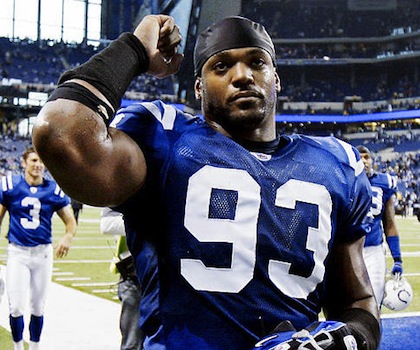 Colts linebacker Dwight Freeney is particular about his food, which is a nice way of saying he's freakin obsessive compulsive. How so? Well, he only drinks three things: water, tea, or grape juice. And when he goes to restaurants, if he doesn't think his preferences can be accommodated (no oil, no pepper, no garlic), he brings his own ingredients for special orders. 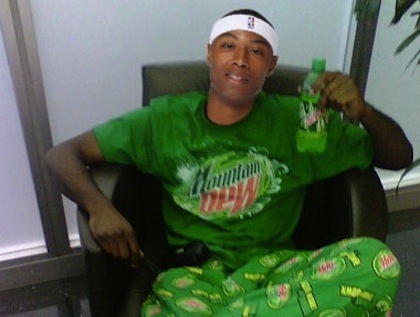 This picture is a photoshop artist's interpretation of what it must have been like to hang out with Caron Butler before he kicked his Mountain Dew habit. It's probably pretty accurate. Yep, Butler used to consume at least 6 cans of the neon poison a day. Then he quit cold turkey and went through serious withdrawal—we're talking shakes, sweats, headaches, etc. But, once he was off the stuff for good, he lost 11 pounds. Of course, now the guy is into chewing straws.

Lamar Odom eats candy all day and all night. He even keeps candy next to his bed at night so when he wakes up he can pop a few gummy savers and fall back to sleep. (My guess is wife Kloe Kardashian likes the bedside candy, too.) The Lakers traded him supposedly because he didn't fit into their new triangle offense, but I'm wondering if it wasn't because he's started packing on the pounds. If you've seen him lately, he's definitely not as slim as he is in this news story. 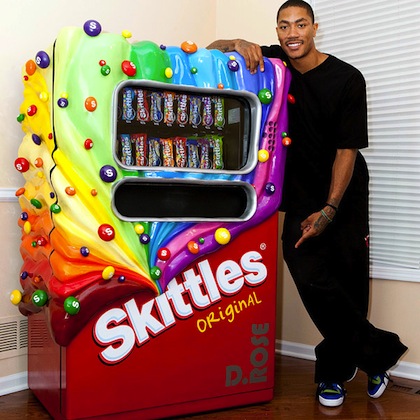 The only pro athlete with a more legendary sweet tooth than Lamar Odom is Derrick Rose. I mean, yeah, Odom eats a lot of candy, but Rose got freaking stomach ulcers from eating too much sugar. Ulcers! That's a serious sweet tooth. Like Marshawn Lynch and Dwight Howard, Rose was also such a big fan of Skittles that the candy maker installed a Skittles dispenser in his locker at the United Center. But now he's trying to kick the candy habit—hired a personal chef and everything. 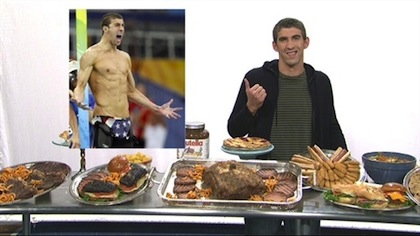 Michael Phelps trains a lot. That's why he's won 14 Olympic gold medals in swimming. And when you train that much, you need a lot of calories to keep you going every day. So Phelps consumes a lot of calories. Like 12,000. During the 2008 Beijing Olympics, Phelps said that his usually daily diet includes a five egg omelet, two pieces of french toast, a bowl of grits, two pounds of pasta, two grilled ham and cheese sandwiches (on white bread, obviously), three chocolate chip pancakes, and a whole large pizza. More or less. Some days he stops in for a footlong at Subway—you know, when he needs a quick snack.

What's that? Drinking your own urine "cleanses" your system? What if you drink someone else's urine? No, I'm sorry Lyoto, not buying it. That's just gross.