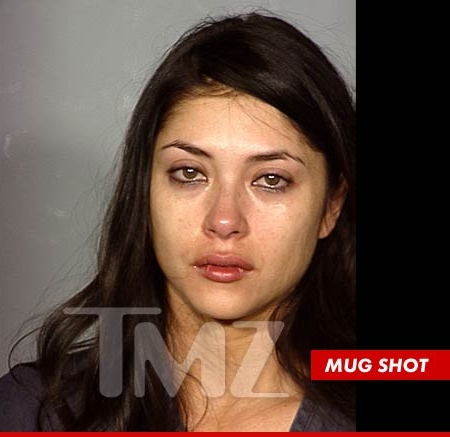 Earlier in the day we told you that UFC Octagon Girl Arianny Celeste was arrested in Las Vegas early Saturday morning and charged with domestic battery.  At the moment we didn’t have any details on the incident, but we have plenty of information now, along with a mug shot, thanks to the people at the Las Vegas Sun.

We’ll allow them to explain:

Celeste, 26, whose real name is Arianny Lopez, and her boyfriend, 34-year-old Praveen Chandra, each were arrested on a count of battery domestic violence, according to arrest reports released Tuesday.

A Wynn employee heard a crashing sound from a room and saw Lopez come running out of the room shortly after 4:30 a.m., the reports state.

Lopez told police her boyfriend choked her and grabbed her right arm during an argument about text messages, the reports said. Officers noted that Lopez had scratches on her right arm.

Detectives interviewed Chandra who said Lopez kicked him in the nose in a limousine, where the argument started, the reports said.

The argument escalated in the hotel room, at which point Chandra accused Lopez of throwing two vases at him, police said.

Chandra recorded parts of the argument on his cell phone, which showed him following Lopez around the hotel room and demanding to know why she kicked him in the nose, the reports said. Officers noted injuries to Chandra’s nose and scratches to his chest and arm.

“Chandra also continued to laugh at Lopez every time she said how she felt about him,” according to the arrest reports.

Chandra denied ever touching Lopez during the argument and told police he didn’t know how Lopez received cuts on her arms.

Police arrested both Lopez and Chandra and transported them to the Clark County Detention Center. A hearing for the two in Las Vegas Justice Court is scheduled for 10:45 a.m. Friday.

The two have been dating for seven months, according to the arrest reports.

So does this mean Arianny is now single?  Sure, there is always the slight possibility that she could be forced to spend some time in the slammer, but I am more than willing to wait!

Call me Arianny!  I don’t care how bad you look in that mug shot.  I’d still be more than willing to be on the receiving end of as many vases as you would like to throw my way.  What more could you ask for from a boyfriend?