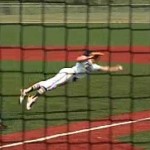 Baseball pitchers aren’t exactly known for their fielding abilities, but that may soon change if we continue to see them make catches like the one produced by Joe Robie during Ohio’s Three Rivers Athletic Conference championship baseball game.