In case you hadn’t noticed, the official countdown to the 2012 Summer Olympics in London began a few weeks ago. They lit the Olympic flame over in Greece on May 10, then transported to the United Kingdom on a special addition gold-painted British Airways jet on May 18. Since then, the torch has been making it’s way around the island, and it will continue it’s tour of England, Scotland, Northern Ireland, and Whales until it head back to London and the games officially begin on July 27.

So that’s cool. Everybody likes the Olympics. (Well, except for the taxpayers who have to pay for them.) But did you ever wonder what the deal it with this whole torch relay thing? For example, when did it start, and whose idea was it? Or what happens to all those torches when they’re done using them? And what if the flame goes out—do they have to start all over?

If you’ve ever wondered these things, then you’re in the right place, because today we’ve got the perfect list: 9 Things You Probably Didn’t Know About the Olympic Torch Relay. 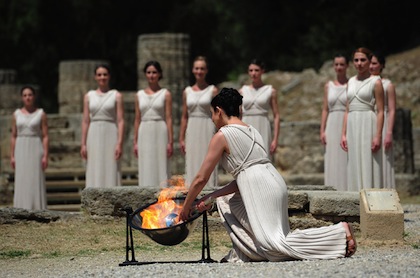 So why do we have an Olympic flame at all? Because that's what the Greeks did. The ancient Greeks, that is. If we all did what the modern Greeks do, the international economy would collapse in about two weeks. Anyway, the ancient Greeks dedicated their Olympic games to Zeus, the biggest of the big men (and women) in the sky. So, during the games, they kept a flame burning in their main temple to Zeus at Olympia, which commemorated the fire stolen from Big Z by Prometheus. (Why they would honor Zeus by reminding him of how they stole his stuff is a question for another day.) Interestingly, they didn't have no flame at the first seven modern Olympic Games, which began in 1896. It wasn't until the 8th Summer Games, held in Amsterdam in 1928, that someone came up with the idea. That was not the origin of the torch relay, however. That came a little later. But hold your horses, we'll get to that a in a little bit. 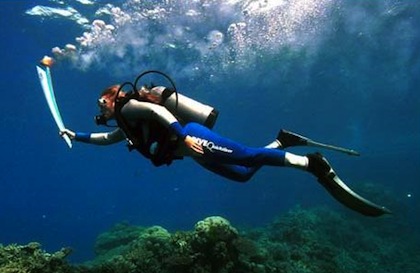 Usually the flame is carried to the site of the opening ceremonies by runners. But over the years, organizers have gotten creative with the mode of transportation. The torch has travelled by bike, horseback, airplane, and various types of boats...but those are boring. In 1988, Fr. Maurice Ouimet carried the torch by snow mobile across Lake Simcoe in Ontario, Canada, on the way to Calgary. That was pretty cool. So was the time scuba divers carried the flame underwater (using a special underwater flare), past the Great Barrier Reef, on the way to the 2000 Summer Games in Sydney. But the coolest of all is probably when the flame was transmitted via satellite from Greece to Canada for the 1976 Summer Games. A special sensor detected the heat of the flame in Greece, then transmitted a signal via satellite to Canada, where a computer relit the flame with—what else—a laser. The whole gimmick was supposed to commemorate human technology. Obviously.

On May 21, will.i.am carried the 2012 Olympic Torch in Taunton, Somerset. You know, because he's English.* But he's obviously not the first notable torchbearer. In fact, there's someone even more awesome who will be carrying the torch in the coming weeks: 100-year-old Diana Gould. On July 25, she'll become the oldest person ever to carry the Olympic Flame. (Though I'm sure I'm not the only one who wishes they could bump her up a few weeks...just in case.) Other famous people to carry the torch? Well, David Beckham's already had his turn in 2012. There was Wayne Gretzky who ran the final leg of from the stadium to the cauldron at the Winter Games in 2010. In 2004, when the torch toured the entire globe before going back to Athens, Ryan Seacrest, P-Diddy, Tom Cruise, and Donald Trump were among the celebrity torchbearers. And leading up to the 2002 Winter Games, there was Willie Mays, his d-bag godson Barry Bonds, Lance Armstrong (on a bike), and the late Christopher Reeves in his wheelchair. *No, he was born and raised in Los Angeles. 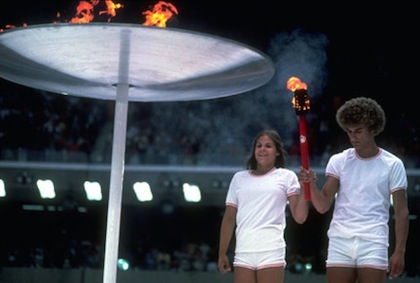 So how many actual torches are there, and how far does the flame travel? Well, here's the breakdown for 2012: 8,000 torchbearers; 8,000 miles; 8,000 torches; 1,000 cities, towns, and villages; 70 days. This sets a new record for the distance travelled within a host country, beating the relay in Canada for the 2010 Winter Games by about 543 miles, or 875 kilometers. However, Canada still wins for largest number of torchbearers—they had 12,000 torches and 12,000 torchbearers for the Vancouver Games. Interestingly, Canada also holds the record for shortest torch relay. Although they went all out by transmitting the flame via satellite from Greece in 1976, they really phoned it in for the last leg. The flame only travelled from Ottawa to Montreal once inside Canada—a distance of about 124 miles. Super lame. Not lame? The 2004 global torch relay. That year 11,300 torchbearers carried the flame a whopping 48,000 miles. And to think, in 1952 only 22 torchbearers carried the flame to Helsinki for the Winter Games. 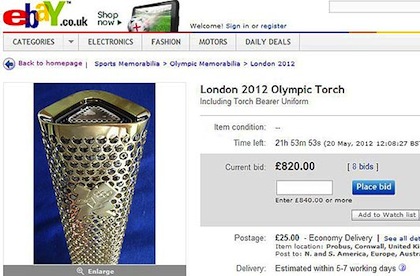 So what's going to happen to those 8,000 torches used to transport the Olympic Flame to London this year? Well, you'll be happy to know that they won't end up in a landfill. The torchbearers get to keep them...as long as they fork over $330. Yes, $330 is apparently how much the 2012 Olympic Torches cost. It may sound like a lot, but given that some torchbearers are now selling the things on eBay for thousands of dollars, $330 is a pretty good investment. (No, nothing is sacred.)

5. So what happens to all those torches? 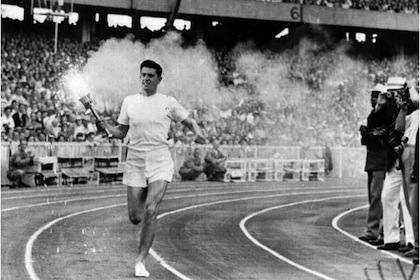 Of course, carrying the Olympic Torch hasn't always been such a fun, lighthearted thing to do. In fact, back before they figured out the safest and most reliable fuels to use for the torches, it used to be quite dangerous. You see, now they use stable liquid fuels like propane or butane for the standard legs of the journey. But back in the day, they wanted to flame to look cool, so they often used solid burning metals for fuel. For example, for the 1956 games in Melbourne, for the final leg of the journey, they used a solid aluminum/magnesium mixture that gave off terrific sparks...and that scalded the crap out of poor Australian track star Ron Clarke. (See that look on his face? That's a "holy $h!% that's f&@$ing hot!" look.) 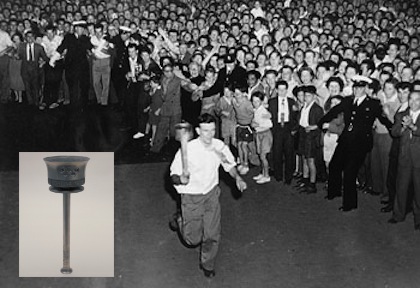 At any public event with lots of publicity, there are going to be protestors. We saw this a few weeks ago, when a topless Ukranian activist tried to grab the Euro 2012 trophy being displayed in Kiev. So obviously, the Olympic Torch Relay is going to be a target for protests. Usually these incidents aren't particularly notable, and they are quickly forgotten. But that was not the case for the Melbourne Games in 1956. That year, a number of people were disgruntled at the amount of pomp and circumstance the torch relay was receiving, so one guy—a veterinary student named Barry Larkin—decided to play a little prank. He made a fake torch out of a pair of underpants, a plum pudding can, and a chair leg, lit it, and then successfully passed it off to the mayor of Sydney, Pat Hills, without being noticed. As you can see from the photo above, the fake torch did bear a striking resemblance to the real one (inset at the bottom left). So it'd would have been pretty easy to get caught up in the moment and not realize you'd been handed a pair of flaming underwear until it was too late. 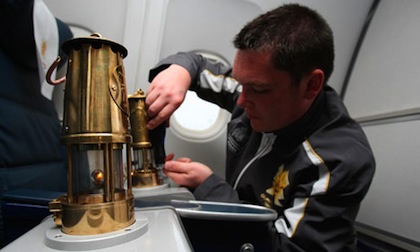 I don't know about you, but if I were ever selected to carry the Olympic Torch—and I won't be, because I'm neither inspirational nor famous—I would be terrified that the thing would go out on my watch. But of course, it's happened before. While engineers do their best to design a torch that can withstand the elements, there's no way the flame won't go out over the course of a 10,000 mile journey. So they have a backup plan. When the Olympic Flame is first lit in Greece, they don't just light one torch and then put out the fire. They light a torch, and then, more importantly, a bunch of specially designed lamps. It's these lamps that carry the flame to wherever it's supposed to go. In the case of the 2012 Torch Relay, there were four gold lamps containing flames lit from the original fire back in Greece that made the 4 hour flight to England. These four lamps will be traveling along with the torch for the entire relay, ready to light it back up should it accidentally go out. Sure, it's kind of cheating. But you didn't really think they could get a single flame halfway across the world without it going out, did you? 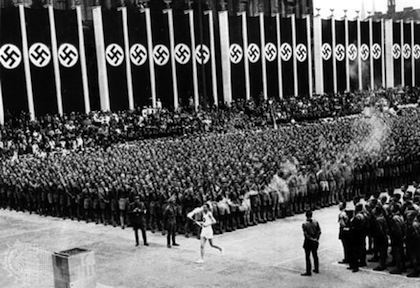 So who came up with the whole Olympic Torch relay idea in the first place? The Nazis. That's right, Hitler and company really wanted to take the pageantry up a notch for the 1936 Olympic Games in Berlin. So Carl Diem, the Secretary General of the Organizing Committee of the Berlin Olympic Games, came up with a great idea: instead of just lighting the Olympic Cauldron (which at that point had only been around for the two previous Games anyway) at the site of the opening ceremonies, why not reenact the ancient Greek flame-lighting ceremony in Greece, then have people run the thing all the way to Berlin. So that's what they did: they dressed a bunch of girls up as Vestal Virgins, appointed one the High Priestess, had her start a fire from the light of the sun, light a torch, and hand it to some blonde-haired blue-eyed dude who started the trip to back to the fatherland. So the next time someone you know talks about how great the torch relay is, you can tell them how it's all just a bunch of Nazi propaganda.