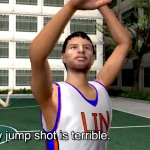 Ever since Jeremy Lin burst onto the scene and took the world by storm this past February, people have debated whether or not it’s racist to make a big deal about the fact that he’s Chinese. (Well, ethnically Chinese, anyway. The guy’s parents are from Taiwan and he was actually born in Los Angeles.)

Now, I don’t purport to have anything to add to the debate. Whenever I hear people having a serious discussion about race, I make like Stephen Colbert and insist “I don’t see color.” Then I leave the room. However, I will mention this: whether or not it’s racist for people of non-Asian backgrounds to make a big deal about Lin’s heritage, it’s clear that lots and lots of people who are themselves Asian really like Jeremy Lin.

Case in point: this instructional video that uses Jeremy Lin to teach English to Taiwanese people.

Of course, this video isn’t about Jeremy Lin per se. It’s about teaching people in Taiwan to have conversations about him in English. And sure, it was made by Next Media Animation, the firm that has become famous on the interwebs for their hilarious CGI reenactments of the news.

But as we saw with the previous video they did about the whole “Linsanity” phenomenon, tucked away behind the tongue-and-cheek facade is genuine pride that this guy is one of them. After all, they could have used Carmello Anthony as their example.  In fact, Carmello Anthony is probably pissed off that they didn’t use him. He can be awfully sensitive about these types of things.